Geelong skipper Joel Selwood has to get through five training sessions to take his place in round one against Greater Western Sydney.

However, he remains confident his recovery from a post-season hamstring operation is on track and he is capable of playing in the season opener without having a VFL hit-out next Friday night. 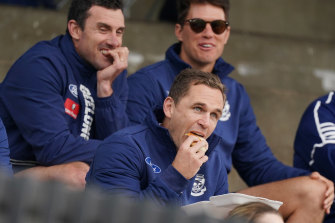 The 31-year-old said it was important as he reaches veteran status that he goes into the first round "feeling good rather than limping in".

Selwood was speaking alongside Essendon's Cale Hooker as the two clubs launched the Powercor Country game to be played at the MCG on May 9.

Asked whether there was any doubt about whether he would be ready to play in round one, Selwood was clear. 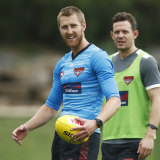 "No, not really but you I can never put it in concrete," he said.

Bombers skipper Dyson Heppell is unlikely to be ready for round one after he had a screw removed from his foot and has been training away from the main group. But Hooker said ruckman Tom Bellchambers, who is yet to play in the pre-season, should be available.

"He [Heppell] has probably been a bit slower than expected," Hooker said. "He was really brave playing injured for us last year, helping us get into finals and having a crack at it and that has probably slowed him down a little bit.

"We just want him back to his best and however long that takes he needs to take even if that is a few weeks."

Hooker confirmed he would not be available until round three at the earliest as he recovers from a hip injury, while Irish recruit Conor McKenna had a hit-out in the VFL after having a short break in Ireland to spend time with family.

Tags: Cats, hopeful, on, round, skipper
You may also like
Latest Posts