Jack Crisp’s name bobbed up from nowhere late in negotiations between Collingwood and the Brisbane Lions, as the Magpies worked to obtain a fair return for the departing Dayne Beams at the end of 2014.

No one in Victoria, beyond fanatics and those in the tobacco territory called Myrtleford, knew much about Crisp except that he had played 18 games in three seasons at the Lions and might be interested in returning close to home. 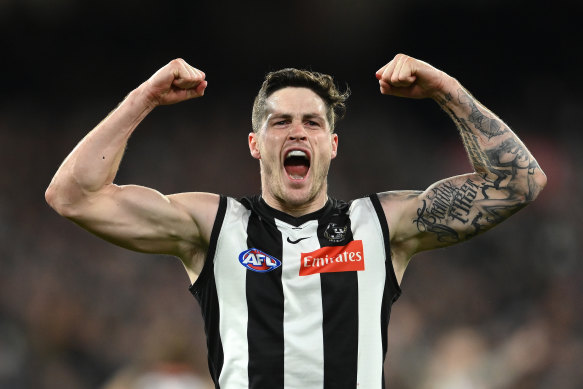 Jack Crisp celebrates a goal against the Dockers in the semi-final.Credit:Getty Images

On Saturday night, he pulled on the No.25 made famous at the Magpies by the late, great Billy Picken for the 187th consecutive time, having not missed a match since he played his first game for Collingwood in round one, 2015.

He won last year’s best and fairest yet entered the season and the game as anonymous as any 28-year-old with a couple of toddlers sitting at the MCG on the weekend.

Then he wandered out in a final in front of 90,612 and joined more high-profile midfielders Scott Pendlebury and Jordan De Goey to strip the Dockers with belief. While De Goey stepped out of more tackles than a clumsy fisherman to be best on ground, it was Crisp who set the game alight with his run.

It was as exhilarating as watching a pair of 400-metre runners fighting out a relay on the back straight.

And it set the tone for the Magpies to run and dare and give their crowd a thrill, a mile away from the staid, deliberate football they played in 2021.

With Taylor Adams out, Crisp ran alongside De Goey and Pendlebury as the trio shared the ball around and raced the ball forward as soon as Collingwood won the ball.

When they did not have the ball, it was Crisp and Pendlebury pointing their arms to guide their teammates with the directions flowing down the ground like falling dominoes.

In the second quarter as the Magpies entered the forward 50 on a slow play Crisp stood on the 50-metre mark pointing, then hit the front of the aerial contest at pace to tackle his Fremantle opponent and win a free kick within kicking distance.

He had pointed, pounced, then punted the goal to take his career set shot accuracy to 18-19 and held his left arm aloft in celebration as, for some unknown reason, the speakers blared Duran Duran’s Hungry like the Wolf.

Crisp would kick a goal from the same spot in the final quarter squaring up his set shot rate at 50 per cent and celebrating with the double cobra that was just reward for a player who has been there every step of the way in the past eight seasons.

His development from a high half-back to a midfielder who runs out the front of centre clearances now only requires a premiership medal to be complete. He has rolled on through many seasons with an effective rather than fluent left foot kick. 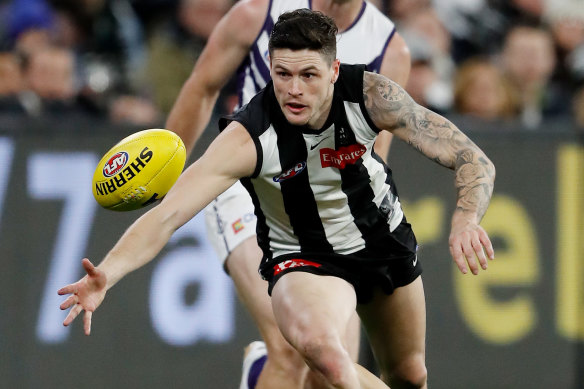 Jack Crisp was consistent and brilliant.Credit:Getty

He has learned the craft from more naturally talented midfielders in De Goey and Pendlebury and joined Patrick Lipinski and Josh Daicos in destroying Fremantle’s emerging midfielders Caleb Serong and Andrew Brayshaw.

De Goey and Pendlebury’s class was apparent, the pair’s kicking skills sublime, with De Goey kicking a goal on the outside of his foot when he had no time to think. When he did have time to think he hit teammates on the move, often the brutal Jamie Elliott at the end of his passes.

Crisp, who is back in his third preliminary final, is entitled to say those simple but apt words Collingwood supporters hope ring true: “Wait, there’s more”.