Of all the floggings that have been administered this year, this is perhaps the most perplexing.

Canberra, at home and needing to win to stay in finals contention, suffered one of their heaviest defeats to a rampant Gold Coast. It leaves the Green Machine with just two victories in 11 weeks, achieved against the lowly Bulldogs and Titans. The talk has turned from a premiership window to a major rebuild. 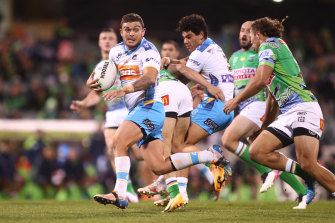 By the time ‘Big Papa’ came back on, his team was 34 points in arrears.

The game was over well before then, as the 22-0 half-time score suggested. The Titans blew a similar advantage against Manly in their previous encounter, but there was no repeat.

The Raiders are one of the few teams with the advantage of having their home fans allowed through the turnstiles. They were left feeling cold, attributable only partly to the three-degree temperatures they braved.

This is the biggest fall of any club. The opening three tries were conceded to big boppers Fifita, Kevin Proctor and Moeaki Fotuaika. Their marquee halfback is now back in the UK and there are question marks about the future of several other misfiring stars. Things are likely to get worse before they get better; next week they face Manly.