Collingwood went into damage control on Friday as the administration tried to explain their decisions to jettison contracted midfielder Adam Treloar and rising star winner Jaidyn Stephenson during the AFL trade period as supporters flooded talkback and social media to express their disappointment at the controversial decisions.

An online petition was launched on ipetitions.com in an attempt to gather support from enough members to push for the board to explain the club's rationale in a public forum as Treloar admitted at a media conference he had wanted to finish his career at the Magpies and was disappointed with the pressure applied to make him switch clubs. 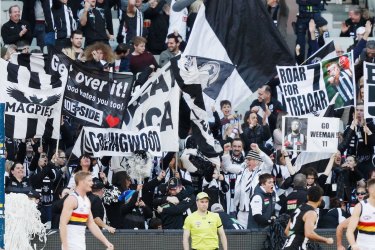 With temperatures rising and Nathan Buckley describing the trades as necessary on Twitter, Collingwood football manager Geoff Walsh told Triple M on Friday morning the club's decision to take the aggressive approach that led to four players being traded out of the Magpies had come after their disappointing 68-point loss to Geelong in the semi-final at the Gabba.

He said the Magpies had decided they needed to shake up their list with a better set of picks in December's national draft and sought to do that by trading Treloar, Stephenson and Tom Phillips, who was close to been traded to Geelong last season before becoming a Hawk on Thursday night.

Walsh said suggestions the trades were made purely to ease pressure on the salary cap were exaggerated but conceded Collingwood fans were entitled to question whether the return they got at the trade table for the players that left was adequate after the Magpies were left with picks 14 and 16 (which they already had) and an extra second-round pick in 2021.

"I understand the immediate emotion because they are losing what they see as flesh and blood and replacing it with a number on a whiteboard."

The backlash among supporters was reminiscent of the reaction to Hawthorn's decision in 2001 to trade Trent Croad to Fremantle in order to secure the No.1 draft pick they used on Luke Hodge, with Stephenson saying he was forced to contact coach Buckley to determine whether the club wanted to trade him.

"He just pretty much said, 'Mate, look for a trade as aggressively as you want and we'll try facilitate it.' There wasn't a very clear reasoning or anything," Stephenson told SEN soon after he was traded.

Walsh said Stephenson should have been under no illusion when he left his exit meeting that he had not met the club's expectations in the past two seasons and needed to work on several aspects of his game to play up to his contract.

"I really can’t let Jaidyn’s comments be etched in history as the version of what he said," Walsh said.

"Now I’m not saying he’s been mischievous or anything, but certainly throughout the year on a number of occasions, Jaidyn was spoken to by both teammates and coaches and administration on what he needed to do to become or get back to being the footballer that he briefly displayed in his first year."

The Magpies have held a members forum where the club hierarchy have answered questions from supporters since 2014.

Tags: Collingwood, deal, fallout, with
You may also like
Latest Posts