Collingwood will need to play their AFLW preliminary final against Brisbane without assistant coach Jordan Roughead there in person, while the Magpies are also weighing up how to split several overlapping club staffers, including premiership captain Nick Maxwell, between their men’s and women’s programs.

The Pies’ run to the pointy end of an extended AFLW season has placed a strain on the club’s resources – not that they are alone in that respect – with a handful of personnel having match-day roles for both the men’s and women’s teams. 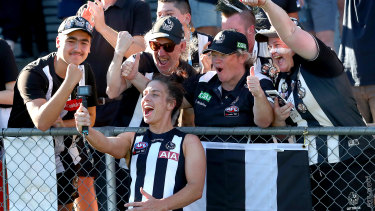 Ash Brazill celebrates after the Magpies’ win over North Melbourne on the weekend. Credit:Getty Images

Collingwood’s men have played on Thursday night or Friday night to start the season but Nathan Buckley’s side host Greater Western Sydney at the MCG this Saturday night, just hours after the Pies take on the Lions in Brisbane for a place in the AFLW decider.

That will mean Roughead, a defender for the men’s team and backline coach for the women’s team, won’t be on hand for the final.

Maxwell, the club’s leadership and culture manager, is one of several club employees who works closely with both the men’s and women’s teams.

AFLW defender Ash Brazill said on Monday that the club was working through how to divide responsibilities this weekend.

“We’re waiting to hear that. I wouldn’t expect Roughy to be there. I think it’s going to be a battle of who gets Nick, who gets our sports psych, who sits on the bench for both men’s and women’s, who will she go to? I think there’s about five or six staff that are shared across both. But the club are already all over that and talking about it,” Brazill said.

Brazill, having recovered from a knee reconstruction, is herself splitting time between the Pies’ AFLW and Super Netball programs, training with both. She will miss the upcoming netball practice matches because of football commitments and says a premiership in the next fortnight may even top her achievements on the court, where she has represented Australia.

“It’d be the best. I’d put that up with playing for Australia. Winning a premiership is just as good, if not better, because you’re with the team all year round. [Wife] Brooke and I, we’re not from Melbourne, so to not have family here and to have our child here at the same time, it’s been a bit tough. But I’ve never been part of a team that’s been so close. It’s nice to have a family that you can just rely on, and celebrate milestones with [son] Louis.” 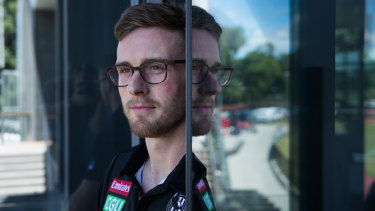 Brazill was swung forward for most of the Pies’ qualifying final win over North Melbourne on the weekend before shifting back late. She wasn’t sure where coach Steve Symonds would start her against the Lions.

“Playing me forward was something we were probably going to do on my return game but unfortunately we had Jordy Allen and Lauren Butler go down,” Brazill said.

“[Steve] said he doesn’t want to play safe footy, this is finals footy, we need to take some gambles and some risks and that was one of them. We started really well. We were up three goals to nil at the start and then obviously North had a six-goal run after that. We changed a few things and we were lucky enough to hold on. I kind of like that. I play defence in netball as well so to be able to play a forward position, it just gives me a bit of a spark just to do something different and not follow someone around all game, it’s quite nice.

“I reckon I’ll be back [this week] but who knows.”

Tags: Collingwood, Juggling, resources
You may also like
Latest Posts