Collingwood could trade their future first round pick in order to further improve their 2020 draft position, with next year's highly-rated father-son prospect Nick Daicos expected to attract a bid early in the 2021 national draft.

With Daicos likely to command the bid under the father-son rules within the first five selections of next year's draft, a club source confirmed the Magpies are open to trading their first pick for next season, to improve the set of draft selections they take into this year's draft, having acquired the Bulldogs' future second round selection to use on points required for Daicos. 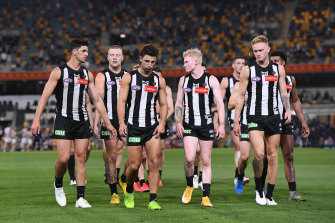 After poorly communicating their rationale for trading out new Bulldogs midfielder Adam Treloar and North Melbourne forward Jaidyn Stephenson to both the players involved and fans, Collingwood have picks 14, 16, 65, 70, 75 and 92 in this year's draft.

They are expected to look to use picks 14, 16, a future first round pick and two future second round picks they now hold to swap picks in coming weeks with other clubs who may desire an extra first round draft pick next season.

The Brisbane Lions are the only club at the moment with more than one future first round pick after Melbourne handed over their 2021 pick to secure picks 18 and 19 in this year's draft.

On Thursday, with Next Generation Academy (NGA) prospect Jamarra Ugle-Hagan to attract a bid early in the draft, the Western Bulldogs used their first round pick for 2020 to secure Treloar on a five-year deal as well as a bunch of second round picks.

They decided it was better to use that pick 14 on Treloar and second round picks than to use the points value attached to that selection.

Ugle-Hagan is one of several key forwards expected to go very early in the draft alongside Logan McDonald and Riley Thilthorpe, however forwards such as Nik Cox may be still available at the Magpies' current picks.

Collingwood have used their past five first round picks to gain Dayne Beams, Treloar and Stephenson, who will not be on the list next season, however they were happy to trade out their first pick in 2018 as Isaac Quaynor joined the club as an NGA prospect.

Reacting to the outrage, Magpies CEO Mark Anderson told 3AW on Friday the decisions were part of a strategy.

"This is not something that just emerged in the last couple of days of a trade week," Anderson said.

Clubs were also told in a meeting on Thursday that the AFL had reduced the requirements for clubs to make three picks in this year's national draft to one, and clubs would also be allowed to assume the list sizes would be 40 when they decided how many picks they took into the draft.

With a record amount of academy, father-son and NGA prospects entering the draft tied to clubs, and the COVID-19 restrictions shutting down football in Victoria, several clubs are considering limiting the number of picks they use at this year's national draft.