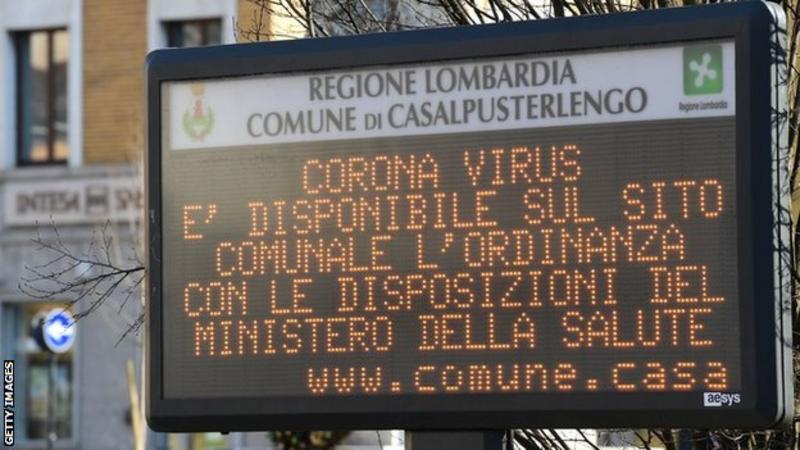 Ospreys and Ulster’s Pro14 trips to play in Italy at the weekend have been postponed as sporting bodies react to the spread of coronavirus.

Fears are growing that the outbreak could become a pandemic as more cases emerge around the world with Italy having reported a fourth death.

Ospreys were due to play Zebre in Parma with Treviso the venue for Ulster’s game against Benetton.

Italy v Scotland in the women’s Six Nations was called off last weekend.

In football’s Serie A, Inter Milan v Sampdoria was among four postponed games.

Benetton v Ulster in the Pro14 has also been called off as sporting gatherings in Italy fall victim to the threat caused by the spread of the illness.

The Italian Rugby Federation has also suspended its National Championship and youth games for the weekend of 28 February-1 March.

Italy has the largest number of Coronavirus cases in Europe, more than 165, and announced a series of drastic measures over the weekend to try to contain the outbreak.

In the northern regions of Lombardy and Veneto, a lock-down is in place in several small towns. For the next two weeks, 50,000 residents will not be able to leave without special permission.

Parma, where Zebre play, is in the Emilia-Romagna region, immediately to the south of Lombardy and Veneto.

Even outside the zone, many businesses and schools have suspended activities.

What are the symptoms?

The main signs of infection are fever (high temperature) and a cough as well as shortness of breath and breathing difficulties.

What should I do?

Frequent handwashing with soap or gel, avoiding close contact with people who are ill and not touching your eyes, nose and mouth with unwashed hands can help cut the risk of infection.

Catching coughs and sneezes in a tissue, binning it and washing your hands can minimise the risk of spreading disease.

What does ‘pandemic’ mean?

Tags: &, coronavirus, Ospreys, Uls
You may also like
Latest Posts