Plans to decide NRL chief executive Todd Greenberg's future on Thursday have been scrapped in order to focus on rugby league's response to the coronavirus crisis.

The Australian Rugby League Commission was scheduled to meet on March 19 to make a call on Greenberg's tenure. A sub-committee including chairman Peter V'landys, Wayne Pearce and Gary Weiss were formed to make a recommendation to the board on whether the former Bulldogs boss should continue in the role. 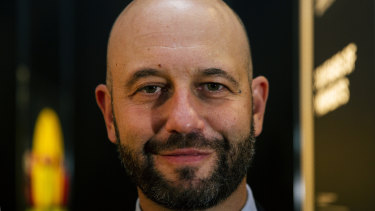 Todd Greenberg has been given a stay of execution.Credit:Getty

League powerbrokers decided they couldn't allow the instability of a power struggle at the top at a time when the coronavirus outbreak will force all games to be played behind closed doors from round two.

Amanda Laing stepped down from the commission during the week to avoid perceived conflicts of interest over the upcoming broadcast negotiations, leaving two spots vacant on the ARLC after the resignation of Mark Coyne. It's unlikely replacements will be determined at Thursday's meeting.

There has been friction between V'landys and Greenberg as the March 19 deadline approached. According to a Herald poll, club chairs and chief executives were split on whether Greenberg should keep his job, although their support for V'landys was strong.

V'landys, who has made it clear he doesn't covet the chief executive position, told Channel Nine during the week that he didn't find Greenberg "arrogant" but that some clubs did.

The pair have been working together closely in recent days as they process the government's response to the pandemic.

Saturday's rugby league games will go ahead as scheduled after Cronulla centre Bronson Xerri was cleared of coronavirus. Xerri, who will not line up against South Sydney at ANZ Stadium, and a teammate were isolated from training but only the Sharks centre was tested. So far, he is the only NRL player to be tested for the virus.

The commission and the NRL executive will meet on Saturday to discuss the code's response to the outbreak.

If Greenberg is able to navigate rugby league through the crisis, it could result in his stocks rising and strengthening his case to remain at the helm long term.

Tags: B, coronavirus, push, response, to
You may also like
Latest Posts