Carlton are hopeful Charlie Curnow can make his long-awaited return and end more than two years on the sidelines in the VFL next weekend.

Curnow, 24, played his last match for the Blues in round 15, 2019, and has since had repeated knee issues, having had his latest surgery in November last year. 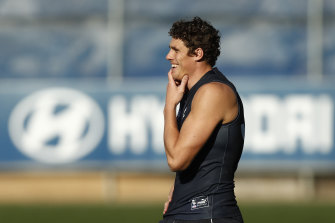 Charlie Curnow could make his return in the VFL next weekend.Credit:Getty Images

The dynamic forward rejoined full training about two months ago and has increasingly lifted his intensity, to the point coach David Teague believes he is on the cusp of a return.

“He is a chance. He got through training on Thursday which was his last really big session,” Teague said after the 26-point loss to Geelong on Saturday.

“As long as he pulls up well and gets through the next week, then he is a chance to play if not this week then the following week.” 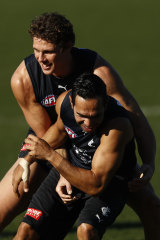 Former skipper Marc Murphy, off contract at the end of the season, remains in a battle to prove his fitness after a calf injury and return to the senior side in the hope of becoming only the sixth Blue to celebrate 300 matches. He needs four more matches in the final six weeks of the season to reach the milestone but Teague said he was unlikely to return next week.

“He needs to train but at this stage it’s probably more on the unlikely side but we will see how he goes on the recovery side,” Teague said.

“We are picking a team to win and we would love to get Marc through to 300 but we will have to have a look at what’s available and what’s the best mix and what’s a right decision for our football club. There are lots of different factors that will come into play.”

Teague was left to bemoan poor kicking and a lack of consistent general efficiency around the ground despite 35 touches from emerging superstar Sam Walsh.

“It seems to be a bit of a trend for us that if we start missing [for goal] early, whether the next guy feels the weight or the pressure of it, we have to get better. You don’t win games kicking at goal like that,” Teague said.

In wet and slippery conditions, Teague praised his team’s defence, led by Jacob Weitering, but the Blues could manage only one goal to half-time, falling to a 6-10 record and remaining winless against a top-eight side this season. The defeat only intensifies pressure on Teague amid a major club review.

“In terms of a [major] scalp they are nice, but we will stick to the process,” Teague said. “If we get it together, we will get a scalp and that will give us confidence.”

Geelong coach Chris Scott praised his team’s grit on a day the Cats rubber-stamped their hold on a top-four spot. The Cats booted seven goals to four after half-time to take charge.

Tom Stewart continued his All-Australian form across half-back while Zach Tuohy was also a rebounding force and ended any hope the Blues had of pinching victory with two goals to start the final term.

The absence of the injured Jeremy Cameron meant Esava Ratugolea became Tom Hawkins’ marking sidekick. Ratugolea kicked the one goal but Hawkins was held goalless by Weitering although he was dangerous as a marking target.

Scott said the loss of Cameron (hamstring) meant the Cats were adjusting to a new structure.

“I thought Ratugolea looked really dangerous right from the start. [But] you can look at the inside 50s [56-38] and think we should have scored a little bit more,” he said. “It’s a different structure to what we have played for most of the year.”

Gary Rohan (cork) will be tested ahead of Thursday’s clash against Fremantle in Perth, while skipper Joel Selwood and Luke Dahlhaus, who were both managed, are set to be available.

Tags: Bu, closing, Curnow, in, on, return
You may also like
Latest Posts