Preliminary final weekend is often dubbed the best weekend of football of the year. We take a look at where things stand and what the teams may address.

The two teams have met only once this season, on a Friday night in round four when the Cats prevailed by 10 points. Best-on-ground Tom Hawkins booted five goals for the Cats, while Joe Daniher and Daniel McStay each had three for the Lions. The visitors led by a point at the final change but a two-goal-to-one final term got the Cats home.

WILL DANGERFIELD AND SELWOOD AGAIN START ON THE BENCH?
The veteran duo started the first three quarters against the Magpies on the pine, and the Cats have not ruled out that happening again. It worked a treat last weekend. Dangerfield, now seen as a burst player, and the tireless Selwood were pivotal in the win. Jarrod Berry, should the Lions take his one-match ban to the tribunal and win, could again go to Dangerfield. 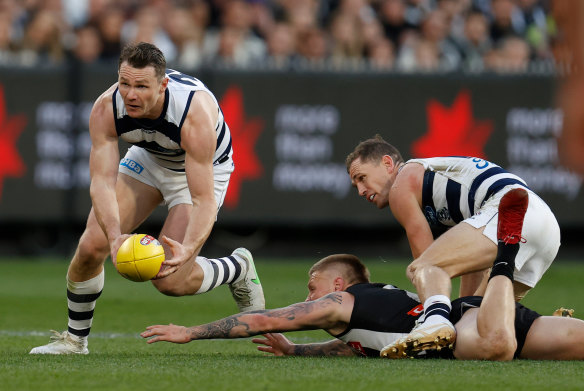 The Cats have not ruled out starting Joel Selwood and Patrick Dangerfield on the bench again.Credit:Getty Images

HOW DO THE LIONS HANDLE HAWKINS AND CAMERON?
Harris Andrews is likely to get the job on Hawkins, while Darcy Gardiner may get the job on Jeremy Cameron. The Lions have rectified their leaky defence, reinforced in their win over Melbourne, and will need to ensure the Cats’ midfielders are under pressure heading inside attacking 50.

WHAT’S THE WORRY FOR THE CATS?
Andrews said the Lions were determined to bury any hoodoos this season, and they now have the belief they can beat anyone – even without Daniher. Friday night was their first finals win at the MCG since 2004. The Lions were strong at the contest after quarter-time against the Demons – as the Cats typically are – and they caused havoc by changing angles and attacking through the corridor.

WHAT DO THE CATS DO ABOUT NEALE?
The Brownlow Medal fancy had 27 touches (18 in second half), including 10 clearances (five in the second half), in another robust effort on Friday night despite being closely shadowed. Mark O’Connor had the job on Neale in round four, but he is out of the side now. The worry for the Cats is that Hugh McCluggage had a big night (25 touches) against the Demons despite also being tagged.

The Magpies had won 11 straight when they ventured north in round 22, but without late withdrawal Jordan De Goey were unable to repeat their free-flowing, chaos-driven style on the smaller SCG. Lance Franklin booted three goals, while Chad Warner and Luke Parker were busy. The Magpies had seven goal kickers. Josh Daicos and Scott Pendlebury had plenty of the ball. 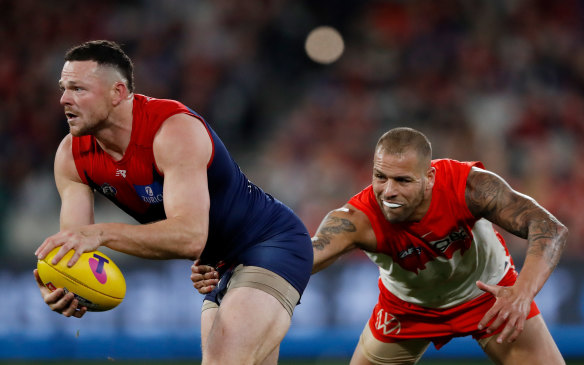 Lance Franklin was held goalless by Steven May last weekend, but the Swans still got the job done.Credit:AFL Photos

DOES FRANKLIN NEED TO BE A FACTOR FOR THE SWANS TO WIN?
Yes – but it doesn’t necessarily need to be directly on the scoreboard. Franklin was held goalless for the first time this year against Melbourne last week, and it did not matter. His presence alone meant Steven May, the Demons’ best defender, had to go to him. While May was best afield, the Swans won the week off.

WHO DO THE SWANS NEED A LIFT FROM?
Warner, an emerging star, was quiet against the Demons with only 13 disposals, while All-Australian Isaac Heeney had only eight touches but did kick a goal. Nick Blakey, nicknamed “the lizard,” was below his best with 10 disposals. The Swans have ranked No.1 for pressure since round 17, and have vowed to again bring the heat.

HOW WILL GINNIVAN HANDLE THE HEAT?
When the teams last met, Jack Ginnivan hurt his hamstring just before half-time, and was booed by parochial Sydney fans when parked on the bench. Swans coach John Longmire later asked for all players to be respected, but Ginnivan may again be in the locals’ sights. He has handled the spotlight all season – this shouldn’t be any different.

CAN THE MAGPIES GET THE JOB DONE?
We are still favouring the Swans, but this is a line-ball call. Magpies coach Craig McRae has said his team is eying a premiership, and their attacking brand of football has so far stood up. If Darcy Moore and Jeremy Howe handle the defensive duties, and the Magpies’ midfield zone stymies their opponents, they can win.