Joe Daniher has always been a player with a sense of theatre, a man for the moment. Lining up for the Brisbane Lions against his old club Essendon for the first time, all the attention was on the rangy forward.

Unfortunately for the crowd, Queensland’s weather gods decided to spoil the party early on, dumping an full inch of rain on the ground in the first half. It instantly turned the match into a territory game, as players hurtled through the slush. 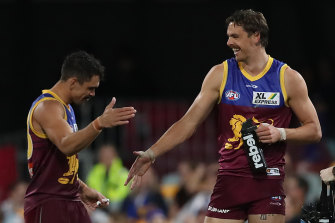 Joe Daniher is all smiles for the Lions during their win over his former club Essendon. Credit:Getty Images

It suited Brisbane, among the pre-season flag favourites but under early pressure with just one win from four, and they adapted far better and more quickly to the conditions, burying the Bombers with seven goals to one in the first half.

And after the Gabba drained during the break, Daniher stepped up with the first highlight of the second half, taking a towering mark and – not wanting to overthink things – immediately played on to put the result beyond doubt.

The Bombers’ only goal to that point was to Cale Hooker, after sucking Zac Bailey into moving from his mark to draw a 50-metre penalty. Hooker finished with four goals, but Essendon otherwise struggled to connect with their forwards all night.

A lot of the credit for that, however, goes to the Lions, who were ferocious at the contest and nearly impassable at half-back, where Daniel Rich and Harris Andrews were superb in marshalling the defence. 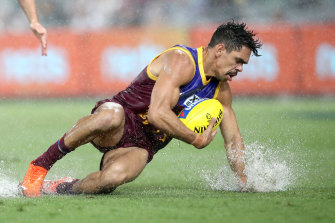 Charlie Cameron splashes after the ball as rain fell early on at the Gabba.Credit:Getty Images

Daniel Rich might have played one of the games of his career. He was certainly given too much latitude to find space, but he used it to perfection, with 27 raking kicks to just three handballs, gaining nearly a kilometre for his side.

Another to excel in the conditions was the reborn Lincoln McCarthy. McCarthy’s game as a defensive forward was, in many ways, the mirror image of Rich’s: most of his work was in tight, he laid 10 tackles, yet still kicked two goals.

The Bombers raised their game slightly in the second quarter, but it was short-lived. The Lions piled on another five goals in response to Essendon’s three, extending the lead to eight goals by the last change, and went on with it in the last.

In the middle, Hugh McCluggage cut the Bombers to ribbons, winning 32 possessions and making this look like a dry game, while Brownlow medallist Lachie Neale – under some pressure after a slow start to the season – kicked two goals on top of 38 touches.

Neither club escaped from the game unscathed, however. Essendon’s reigning best and fairest winner Jordan Ridley was concussed in the second quarter, and the Lions lost midfielder Jarrod Berry to an adductor injury. 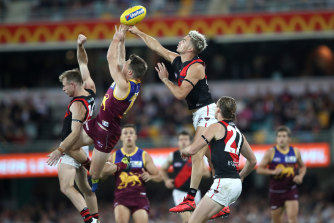 Matt Guelfi of the Bombers flies high to spoil a mark.Credit:Getty Images

The Lions looked like they might have gone into the game too tall as the rain bucketed down, but the return of Dan McStay to the Brisbane Lions turned out to be a bonus. He kicked the side’s first goal from a clean mark and provided an additional option throughout.

By the end of the first quarter, Andrew McGrath and Zach Merrett had 25 possessions and nine clearances for the Bombers, but their influence on the contest was dwarfed by McCluggage, Rich, Andrews and Dayne Zorko.

Contested possessions were reasonably even, but it was the Lions who appeared to be playing with greater hardness, directness and purpose. There was spirit too: Jaxon Prior kicked two goals in a handy debut, and was a popular inclusion.

And Daniher? Just to remind us of his sense of theatre, he finished with the last goal of the game, missed an absolute dolly a minute later, but more importantly he stayed involved throughout, moving beautifully and collecting 25 possessions, pushing high up the ground.

It didn’t make a miserable night for Essendon fans any easier to take. For the Lions, coming after the women’s grand final win earlier in the day, it was a procession.

Tags: Big, Daniher, in, Lions, rule, win
You may also like
Latest Posts