Neale Daniher will be elevated to legend status at Essendon along with champion 'Baby Bombers' Gavin Wanganeen and Dustin Fletcher and long-term medico Dr Bruce Reid, who was club doctor through the drugs saga.

The quartet was announced on Monday night and will be honoured at next year's Hall of Fame event.

Daniher was the first of the Danihers at Essendon, emerging in 1979 when he won the Bombers' best first-year player award and was VFL recruit of the year. 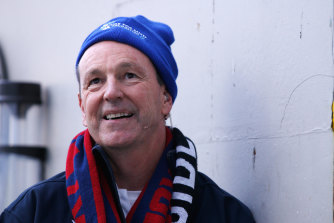 He represented Victoria in 1980 and 1981, won the Bombers' best and fairest in '81 and in 1982 was made captain, the club's youngest skipper by Kevin Sheedy.

Injuries cruelled his playing career but he was a successful senior coach at Melbourne and assistant coach at Fremantle.

He has in recent years become the face of FightMND – a charity that combats motor neurone disease, which Daniher was diagnosed with several years ago.

He now joins his brother, Terry, also a former captain of the club, in being recognised as a club legend.

"All four gentlemen are very worthy recipients of this significant honour; their names are synonymous with the Essendon Football Club and their contribution to the red and black is profound," new club president Paul Brasher said.

"Both Neale and Bruce have been fighting respective health issues in recent years, so I am delighted our Hall of Fame committee can bestow this honour to two such beloved members of the Essendon family."

Wanganeen played 127 of his 300 games for Essendon, winning a Brownlow in the Bombers' premiership year of 1993. He was also the first Indigenous player to win the Brownlow. 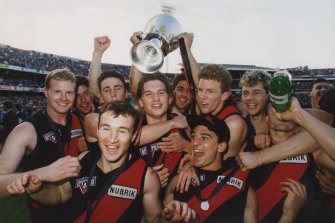 Gavin Wanganeen and Dustin Fletcher with teammates at the 1993 grand final. Credit:Ian Kenins

Fletcher's career spanned 23 years and he is one of only four VFL/AFL players recorded by the AFL to have played over 400 games.

He was a premiership player in 1993 and 2000, a year in which he also won the club best and fairest award.

Reid was the long-term doctor at the club. He was diagnosed with mesothelioma, an asbestos related cancer, which prompted him to take indefinite leave two years ago.

He joined the Bombers in 1982 after spending time as Richmond's club doctor when Sheedy played with the Tigers.

Tags: Daniher, named, of, part, quartet
You may also like
Latest Posts