The spectre of Alastair Clarkson continues to hover over David Teague after the Blues again let slip a chance to torpedo a top-eight side – this time Geelong – on Saturday.

On a bleak evening when the fog set in, Blues’ supporters – despite having watched back-to-back wins over lowly opposition – were left wondering where their side was heading, as the Cats strode to a 26-point win at the MCG. 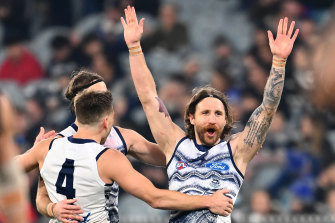 Zach Tuohy celebrates after scoring for the Cats in their win over Carlton.Credit:Getty Images

The Cats appeared to relish a largely dour contest where a combined four goals were scored until half-time. The wasteful Blues went 68 minutes of game time from their first early in the opening term to when Harry McKay converted in the dying minutes of the third term.

This defeat will only intensify pressure on Teague amid an external club review, coming with four-time Hawthorn coach Clarkson unofficially on the market.

The Blues had not beaten a top-eight opponent this season but with the Cats opting to rest skipper Joel Selwood, the opportunity was there. However a combination of robust, hardened opponent, and wasteful kicking (they went by 59 per cent by foot) – the latter a hallmark this season – meant the Cats had a 56-38 advantage in inside 50s and strengthened their hold on a top-four berth.

Intercept-marking king Tom Stewart and Zach Tuohy were superb for the Cats in manufacturing a way to be loose across half-back, prompting Teague at half-time to say his forwards needed to man up quicker. 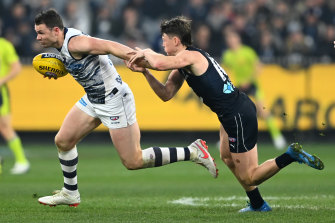 Patrick Dangerfield attempts to get away from the Blues’ Sam Walsh.Credit:Getty Images

“It was tricky conditions out here … as the game went on, we flexed our muscle,” Tuohy said.

There was a moment of concern for the Cats in the third term when the busy Sam Menegola and Jake Kolodjashnij collided on the goal-line rushing through a Jack Silvagni long shot but both men got to their feet.

The indefatigable Sam Walsh, likened to West Coast great Ben Cousins by former Blue Dale Thomas, roamed far and wide for his 35 touches, including nine score involvements, but he lacked support. The Blues broke even at the clearances but they were unable to handball their way through the Cats’ defence. 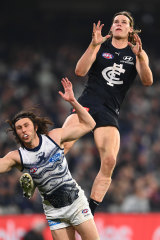 The Blues trailed by three goals at the final change but hopes of a rally dissipated within minutes of play resuming when Tuohy twice converted, the first having outmuscled Walsh after a clever kick from Shaun Higgins, and the second after Blue Liam Stocker botched a clearing kick from defence – encapsulating his evening.

The grinding contest was given a shot of life in the second term when Gary Rohan flew over Blues ruckman Tom De Koning and hauled in a mark-of-the-year contender – but he squandered the set shot.

Full-back Liam Jones (back) was a late withdrawal and his absence was immediately felt when Esava Ratugolea used his size and strength to beat Lachie Plowman in a one-on-one contest, and converted. Ratugolea did not manged another goal and, while Jacob Weitering held Tom Hawkins goalless, the Cats still found a way to score. Hawkins and the absent Jeremy Cameron have worked well as a tandem but Hawkins and Ratugolea appeared to get in each other’s way when attempting to mark deep in attack.

Patrick Cripps was in a moonboot on Monday with a foot injury after the win over Fremantle and did well to pass a fitness test. But in a season where the Blues’ co-captain has too often been in the casualty ward, it was no surprise to find the hard nut hurt again, this time with a corkie to his quad which required strapping. Cripps’ ankle was still clearly an issue but he ground his way to 19 touches. Eddie Betts had only eight touches, prompting Thomas on Triple M to say the Blues “probably” would not offer the small forward a contract extension.

Gone but not forgotten

Lachie Henderson was given a shake of the hand from Silvagni when the teams lined up but there was only jeering from the Blues’ faithful whenever the veteran defender touched the ball in his 200th match. Henderson had 15 matches with Brisbane before notching 102 with the Blues, later requesting a trade to the Cats with three matches remaining during the 2015 season. That was a messy departure, for the Blues responded to his trade by benching him for the rest of the campaign, a move which prompted his mother Vonnie to verbally lash the Blues and even AFL chief Gillon McLachlan.

Tags: as, Cats, dark, Day, for, St, Teague
You may also like
Latest Posts