The Springboks have made a massive nine changes to their starting XV for the second Test in Sydney, with coach Jacques Nienaber swinging the selection axe despite dealing with injuries to senior stars.

The Boks have been hammered by injuries for the Rugby Championship clash at the new Allianz Stadium, with Handre Pollard, Lukhanyo Am, Pieter-Steph du Toit and Elton Jantjes all ruled out.

But in a demonstration of the Springboks’ depth, the injury toll didn’t scare Nienaber from making multiple changes to the side based on form as well. Steven Kitshoff and Malcolm Marx are in the front row, Jasper Wiese is included at No.8, halfback Faf de Klerk has been dumped from the 23 for Jaden Hendrikse and Cobus Reinach, and teen sensation Canan Moodie is on the wing for his Test debut.

After impressing for the Bulls in the URC, Jake White labelled Moodie a future “100-Test” Springbok but the hard-tackling 19-year-old will have a baptism of fire marking Marika Koroibete.

Of the six survivors from the Adelaide run-on team, centre Damian de Allende will be the only man standing in a new-look back line in Sydney.

Fullback Damien Willemse has been shifted to No.10, and veteran Willie Le Roux will return at fullback. Jesse Kriel will replace Am at outside centre, and Warwick Gelant has been shifted back to the bench. Franco Mostert has been included in the loose forwards. 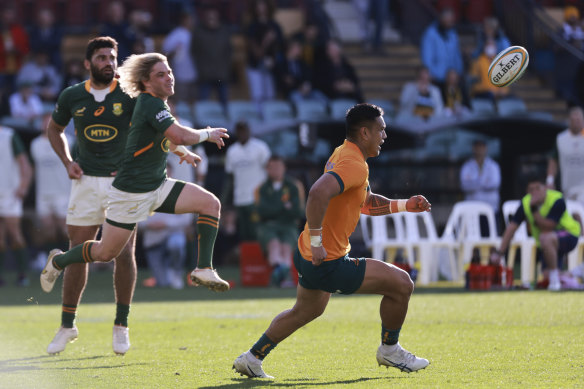 “We selected a team we thought would be best for this match given that we have several players out with injuries and with an eye on how we want to play,” Nienaber said.

“Handre, Lukhanyo, Elton and Pieter-Steph are all carrying injuries which adds to a list that includes Cheslin Kolbe and Sbu Nkosi, while Kurt-Lee Arendse is also out serving a suspension, and this has forced our hand to make a few changes in some positions.

“With both fly-halves injured, Damian was the natural choice at No.10 where he has slotted in for us a lot. He is also becoming a settled player in our team with over 20 Test caps to his name.

“This will also be a great test for Canan, who was a standout player for the Vodacom Bulls this season in the Vodacom United Rugby Championship. He’s a very talented player, who will enjoy this opportunity.” 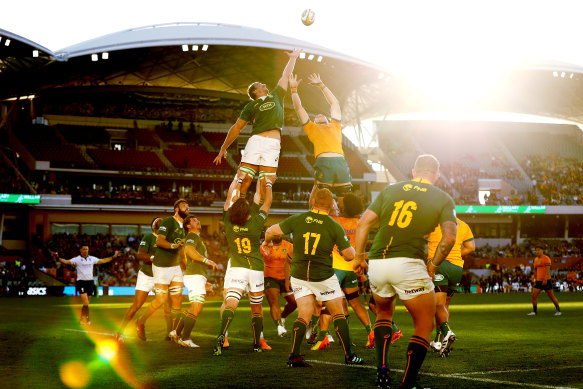 The Wallabies lose a lineout in Adelaide.Credit:Getty

The Wallabies are likely to be a far more settled team, when named on Thursday. There is a strong chance coach Dave Rennie will name an unchanged side, although Angus Bell is back in the mix after a long-term foot injury.

The Wallabies will focus heavily on shoring up a dysfunctional lineout, which operated at 53 per cent in Adelaide.

“We’re hugely disappointed in the way our lineout functioned, but we’ve been working hard on that … we reviewed quite hard and we will be better for that,” breakaway Jed Holloway said.

“Our preparation has been around building consistency because it’s something we haven’t done yet, put together back-to-back performances. It’s purely being better and being ready for them to also be better as well.”

The Wallabies backed halfback Nic White, who copped criticism about his reaction to Faf de Klerk clipping him in the face in Adelaide.

Watch every match of The Rugby Championship on the Home of Rugby, Stan Sport.