Melbourne have booked their ticket to a preliminary final after beating Adelaide in a fiery grand final re-match at Ikon Park on Friday evening, kicking off the season seven final series.

The reigning premiers will now have to take the long road in trying to go back-to-back as they now face a sudden-death semi-final. 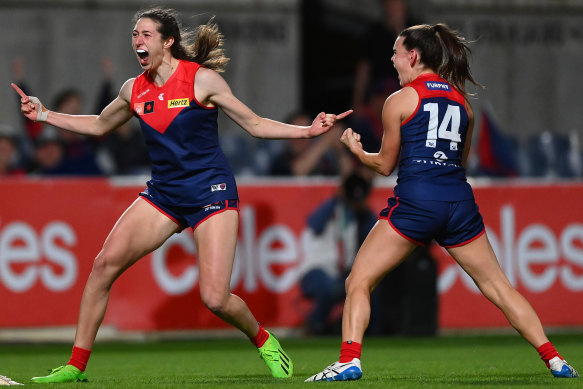 Adelaide set the pace of the game early, bursting out of the gates and sending an early message as Danielle Ponter scored the quickest goal in AFLW history in 19 seconds.

The Crows’ Caitlin Gould then booted the next two goals as Adelaide kept Melbourne goalless in the first term and put the game on their terms.

But Melbourne responded and turned the game on its head in the second quarter. The Dees kicked three back-to-back goals and this time kept Adelaide goalless as they took a two-point lead into the main break.

While the third term saw each one kick just one goal each – Alyssa Bannan for the Dees and Ashleigh Woodland for the Crows – Melbourne took control in the final term with three goals to none.

It was Eden Zanker who sealed the deal midway through the fourth quarter in front of a vocal home crowd. 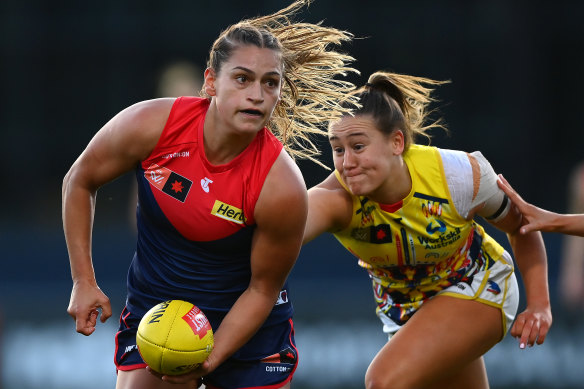 Melbourne’s ability to spread, find space and control the ball was the difference in the end. In the final quarter, they made avenues to goal and shut down Adelaide’s fast style of play. The Crows defence not enough against the Dee’s firing forward line.

Melbourne’s Olivia Purcell (26 disposals), Lily Mithen (21 disposals) and Tyla Hanks (18 disposals) were prolific at the source, while Tayla Harris stepped up in the ruck and finished with 19 hitouts.

Importantly for the Crows they had their captain Chelsea Randall on the park despite her suffering a high-grade ankle strain two weeks ago. Unsurprisingly, the tough player – four times named the AFLW’s most courageous player as voted by her peers – didn’t appear too ginger and was a key contributor.

Ebony Marinoff (12 tackles) and Anne Hatchard (eight tackles) were fierce in the mid for Adelaide.

Next in the finals series, Brisbane play Richmond at Metricon Stadium in a qualifying final before Geelong host North Melbourne at GMHBA Stadium on Saturday.

Richmond will make their maiden AFLW finals appearance with the double chance in their pocket after a nail-biting draw with the Kangaroos.

On Sunday, Collingwood and Western Bulldogs play an elimination final at Victoria Park.