Fremantle coach Justin Longmuir has urged his players to regain their hunter mentality as the Dockers attempt to keep their top-four hopes alive.

A three-match winless run has resulted in Fremantle dropping to sixth and they will likely need to win their remaining three games and rely on other results to nab a prized top-four berth. 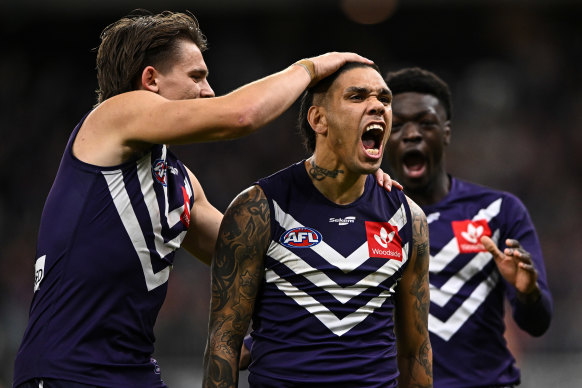 The Fremantle Dockers are fighting to keep their hopes of a top-four finish alive.Credit:AFL Photos

Saturday’s clash with the Western Bulldogs at Marvel Stadium looms as the Dockers’ toughest match in the run home, with West Coast and GWS to follow.

The 10th-placed Bulldogs (10-9) are fighting for their finals survival after blowing a 26-point lead in last week’s 28-point loss to Geelong.

It means Saturday’s match is going to have a desperate edge to it, and Longmuir wants his troops to get cracking.

Fremantle started the season in stunning style, upsetting Geelong, Melbourne, and Brisbane to announce themselves as a premiership threat.

But listless losses to Sydney and Melbourne either side of a draw with Richmond have raised major question marks about Fremantle’s credentials.

“We need to find an urgency, there’s no doubt about it,” Longmuir said.

“We’re getting to the pointy end of the season. But simplicity is the key when players have got their minds clogged with other things.

“We’ve probably just lost our edge a little bit as well with the way we play.

“I think we were a much harder team to play against earlier in the year. We need to get back to being the hunter It’s a good opportunity this weekend.“

Bulldogs coach Luke Beveridge isn’t talking to his players about their precarious position in the hunt for top-eight spots, but has no doubt it will be on their minds.

“All I can do is preach the next challenge, but I’m sure the individual’s mind strays and thinks about what’s up ahead,” Beveridge said.

“We all do it. But it won’t get us too many places if we think about things that aren’t important right now.

“It’s not in our control anymore, so all we can do is do our best to win.”

The Bulldogs were dealt a blow on Friday when Norm Smith medallist Jason Johannisen was ruled out with an ankle injury.

Laith Vandermeer was parachuted into the 22 to replace him, while prized father-son pick Sam Darcy has been included for his AFL debut.

Forward Rory Lobb is no certainty to play after struggling at times at training on Friday.