Kalyn Ponga has been officially ruled out of the State of Origin series due to a shoulder tear.

The 22-year-old released a statement alongside his family on Friday revealing his "disappointment" at being medically advised to have surgery next week. 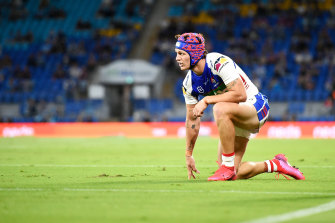 Kalyn Ponga has released a statement revealing his “disappointment” at being medically advised to undergo surgery next week. Credit:Getty

"Witnessing the sacrifice of the Warriors players and their families in order to keep the season going, was nothing short of inspired and selfless," a statement read.

"Many people have made sacrifices throughout this trying period for the game and that commitment has not been lost on Kalyn or the family.

"Kalyn will be available for Knights selection come the start of the 2021 season."

The injury hampered Ponga's performance in the back half of the season and he was seen clutching his shoulder during the Knights' loss to South Sydney on Sunday.

Ponga was named in Queensland's initial squad of 15 on Wednesday.

New Maroons coach Wayne Bennett said on Friday morning he wasn't sure whether Ponga had been officially ruled out.

"I just haven't been told that officially," he said.

"I don't know. We thought we'd know something yesterday afternoon but I have received no messages and I've checked my phone this morning but I don't know what is going on with Kalyn.

"I know how much players do want to play Origin, but if they're not fit to play I don't want them to play.

"Invariably they don't play well because they don't have confidence so it doesn't work."

Tags: 'Devastated', o, out, Ponga, ruled
You may also like
Latest Posts