Brandon Smith has penned an apology claiming he never meant to “disrespect” the Storm, but it remains to be seen if the move will be enough to placate furious club officials.

Smith will join the Roosters after his current contract expires at the end of next season, going back on his word that he would give the Storm a final chance to pitch a contract extension. 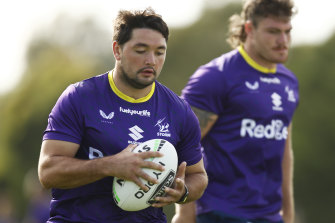 Storm powerbrokers are so incensed with Smith’s conduct, which included publicly shopping himself up the eastern seaboard and then extolling the virtues of the Roosters after a meeting with coach Trent Robinson. His expletive-laden appearance on the YTKR podcast could yet result in sanctions from the NRL, but the bigger issue is whether his position with Melbourne is untenable.

On the podcast, Smith spoke about a supposed drinking culture at the Storm, a comment the premiership-winning hooker claims was taken out of context.

“I want to address current media speculation going on around me at the moment, and specifically my comments on the YTKR podcast,” Smith said in a statement he posted on Instagram on Tuesday.

“Over the past two months, I’ve read multiple headlines about me day in day out, many of which are untrue, and none that came from my mouth directly.

“I done [sic] this podcast for that very reason. To be fully transparent about the process I’ve been going through.

“It’s honestly been really exciting throughout and I’m truly grateful to be in the position I’m in.

“One thing I pride myself on is being myself, and regardless of the backlash I will continue to do so.

“That being said, I do acknowledge and want to apologise for how some of the comments have been received.

“Specifically to the Melbourne Storm, it was never my intent to disrespect the club that has done so much for me and my family. And that goes for my coaches, members, staff and most of all, my teammates.”

‘I speak from the heart – for better or worse sometimes – and I’m sorry if anyone was hurt by my words.’

The Roosters are unlikely to have the salary cap space to accommodate Smith straight away, which could prompt the clubs to discuss a player swap should the Storm feel it is better for the parties to part company immediately.

Smith said he would continue to speak his mind despite the controversy the podcast caused.

“I speak from the heart – for better or worse sometimes – and I’m sorry if anyone was hurt by my words,” the statement continued.

“But at the end of the day they are my words.

“I specifically also want to address the media honing in on my comments around the Storm culture, and it being framed as a ‘drinking culture’ they have going on down there. Our culture is built on hard work and effort as the main priorities.

“These comments have been taken way out of context, and I emplore [sic] anyone interested in the matter to watch the interview in its entirety before jumping to conclusions.

“This will be the last time I address the comments made on this podcast. My focus is now fully turned to the future with the Melbourne Storm and the amazing opportunities laid before me.

“If I’m to be label [sic] a terrible person so be it, if I cuss too much I’m sorry but that is me and I will continue to be me.”