Carlton’s Sam Docherty has stepped down as Blues’ co-captain to focus solely on getting himself right for the 2022 season, having had chemotherapy post-season after a recurrence of testicular cancer.

The popular and respected Blue has been training well after the second cancer diagnosis in 12 months and expects to play a key role rebounding from defence in the upcoming season. 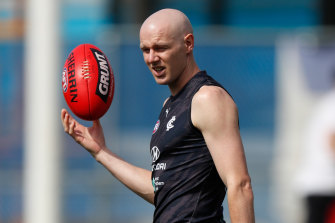 However, Docherty and the Blues hierarchy agreed he should not have extra formal commitments beyond playing as the Blues aim to make finals under new coach Michael Voss.

The decision leaves Patrick Cripps likely to become sole captain after sharing the captaincy with Docherty for three seasons.

Voss said he knew Docherty’s approach to leadership would not change but he wanted to free him of some responsibility.

“We know the quality person ‘Doc’ is and we don’t expect his involvement as a leader, despite not being in the leadership group to alter,” Voss said.

Docherty’s mental resilience at the Blues is much admired, with the 27-year-old suffering two knee reconstructions and battling testicular cancer. Throughout the ordeals he has maintained a positive outlook and been a shining light across half-back for most of his time at the club.

He battled for form and confidence at times last season before an ankle injury ended his season after 15 games.

Blues football manager Brad Lloyd said the club wanted to give Docherty all the support and time he needed to get his body right.

“Sam is an exceptional individual and has been a tremendous leader for this football club. His pre-season preparation has been strong to date and he’s progressing well. Right now, our priority remains on ensuring we continue to provide support to Sam throughout this period, to allow him every opportunity to focus on himself, and enable the time required to get his body right,” Lloyd said.

The Blues will announce their leadership group in late January or early February.