Fremantle coach Justin Longmuir has declared captain Nat Fyfe will be “cherry ripe” for the start of the AFL finals after deciding against playing him in the WAFL.

Fyfe was rusty in his return from a hamstring injury in last week’s 20-point win over GWS, tallying just nine disposals and 0.1 playing predominantly as a forward. 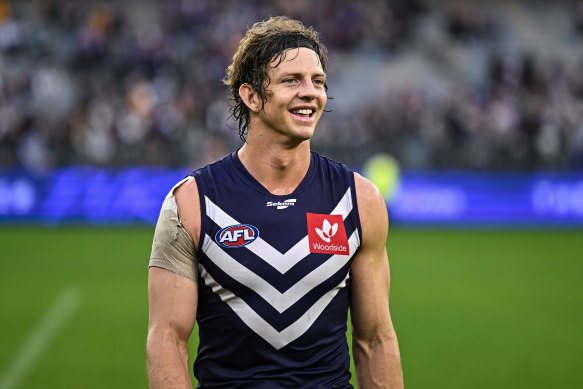 The two-time Brownlow medallist has played just seven matches this season amidst shoulder, back and hamstring issues, and he will enter the finals series severely underdone.

Fremantle toyed with the idea of giving Fyfe an extra run in the WAFL this weekend but that has now been officially canned.

Instead, Fyfe will be unleashed in next week’s elimination final against the Western Bulldogs at Optus Stadium after having a solid fortnight of training under his belt.

“I think it (training this week instead of playing) is best prep for him, and for him to be around the senior group and be really specific with what he needs to work on,” Longmuir told reporters on Wednesday.

“We feel like we can get some specific work into him.

“We’ve got some injury issues to our tall forwards, so the risk part came into it (as well).

“He was sore in some spots (after last week’s game), but his hammy was good, and some of the other issues he’s had over the season were good.

“He’ll get a full two weeks of training into him and be cherry ripe for the first final.”

Fyfe’s availability has taken on extra importance after the club’s tall stocks were hit hard by injury in recent weeks.

Rory Lobb is recovering from a bung shoulder, Matt Taberner is still nursing a calf injury, while swingman Griffin Logue is working his way through an adductor issue.

Lobb, who was rested last week, isn’t in any doubt to take on the Bulldogs, but Logue and Taberner are further behind in their recoveries.

“We’re still working through Griff and how quickly we build his loads up,” Longmuir said.

“It (the injury) has popped up out of nowhere a little bit. I can’t really say what it is and define it.

“He’s sore. We need to work through that.

“Tabs, he’ll be touch and go (to play in the WAFL) this week, and he’ll be pushing it for the week after. We’re expecting him to play the week after (in either the WAFL or AFL).”

Lobb has been carrying his shoulder injury since the round 18 loss to Sydney.

But skipping last week’s match – combined with the rest from the pre-finals bye – means the 29-year-old will have had three weeks to recover.

“The week off and not getting hits … avoiding that will do him the world of good,” Longmuir said.