As a post-graduate psychology student, Patrick Cripps has a particular interest in the high-performance field. This, in many ways, is about how best to extract top-level efforts from elite athletes. And if the Carlton skipper needs a first-hand example of how this should look in reality, he need look no further than himself.

“My motivations stay the same. I still want to try and get the best out of as many people at the club as possible, to be at our best and maximise our potential,” Cripps said of his intentions after he was appointed sole captain.

So far, so good, with Cripps favourite for the Brownlow Medal while leading his Blues into the top four with a 6-2 win-loss record, the first time they have been in this position since 1996. 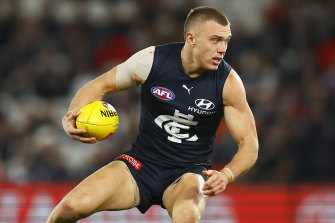 Patrick Cripps has lifted his game to another level this season.Credit:Getty Images

After two injury-hit years, Cripps is enjoying a career season, averaging 29.3 disposals and 7.9 clearances per game through his seven matches. This included 35 disposals, 12 score involvements, 10 clearances and two goals against the Crows on Sunday. That he already has 13 goals, equalling a career high, highlights an ability to be even more damaging as the best midfielders are, and a sign he no longer feels he has to be the lone bull in the Blues’ midfield paddock.

Cripps, a midfielder with a key forward’s body, is now prepared to push forward, either taking his tagger with him, or forcing a change in match-up. He has hit the scoreboard in every game, with three goals against Richmond and Fremantle.

Blues coach Michael Voss revealed the Blues and Cripps had embraced a change of mindset. Yes Cripps, as a truly great player, will look to exert as much influence as possible in his typical role at centre bounces and stoppages, but he no longer needs to do this all the time.

“We had to make sure that he doesn’t feel like, when he goes out to play, that he has to be the difference in every game he plays,” Voss, who played the game with the same take-no-prisoners attitude, told Fox Footy.

That was shown against the Crows on Sunday when a selfless Cripps, sometimes with two defenders on him, was prepared to help manipulate the stoppages by ensuring a free teammate could influence the extraction.

That’s a credit to the strong relationship between Voss and Cripps, coming after the latter’s relationship with former coach David Teague last year appeared rocky.

Teague, at times, was critical of players “trying to do something extra to help the side,” while Teague appeared to take a shot at an injured Cripps for over-handballing in the final match of the season against the Giants. This came a day after Teague’s manager Liam Pickering had questioned Cripps’ lack of public support for the embattled coach and declared “it’s been a long time since he has delivered in a consistent manner both ways in a game of football and actually puts defensive pressure on, chases and tackles”.

The Blues’ recruiters also deserve credit. The decision to sign former Swan George Hewett, a robust midfielder (although he has missed the past fortnight), and former Dockers’ midfielder Adam Cerra was the right call to not only free up Cripps but to help fellow star midfielder Sam Walsh. That Matt Kennedy has also had a break-out season has given the Blues a “high-five” on-ball brigade.

Cripps’ unrelenting style begun to take a physical and mental toll, and meant he had been regularly strapped or taped up. But that’s not been as prevalent this season. Cripps is running with a freedom and playing with the joy of a man knowing, as Essendon great Matthew Lloyd pointed out, the world is no longer on his shoulders. A rebuilt, streamlined body has also been a key factor.

“He [Cripps] takes clearly the main credit for that, as does our high-performance team. They have done a fantastic job getting him in the condition he is in right now but, importantly for him, he has been able to train every single session, he has hardly missed. He has been extremely durable,” Voss said.

“I think his body is feeling good, which helps. The amount of work he puts in through the week, he is as professional as anyone you will ever see. He is bloody determined to get this club to where he wants it to be,” Newman said.

Cripps enjoys a mid-week surf when possible, which he says allows him to reset and then “crank it up for the next game”. Teammates marvel at his attention to detail, including the manner in which he plans his week and holds himself accountable.

His form has been so strong he has likely polled at least a dozen Brownlow Medal votes to this point, while Lloyd says the three-time best and fairest and dual All-Australian would be All-Australian captain, should that team be selected now.

For Cripps though, all that matters is a belated finals run. That two more wins this season will equal a season-high for him underlines how tough a time he has endured in what has largely been two decades of waste at Princes Park.