‘This game shouldn’t happen!’ grins Joe Ford ahead of his crack at Saracens on Sunday in the Championship with Doncaster. ‘I imagine Owen Farrell’s on more than our whole squad!’

He is right too. The England captain’s 2021 earnings will likely double today’s entire Doncaster 23-man squad, who each take a little more than £20,000-a-year.

Fully professional Doncaster hope wallet sizes are the only glaring difference between the sides, despite Sarries coming fully loaded; Farrell playing his first club game since September having recovered from a calf strain. 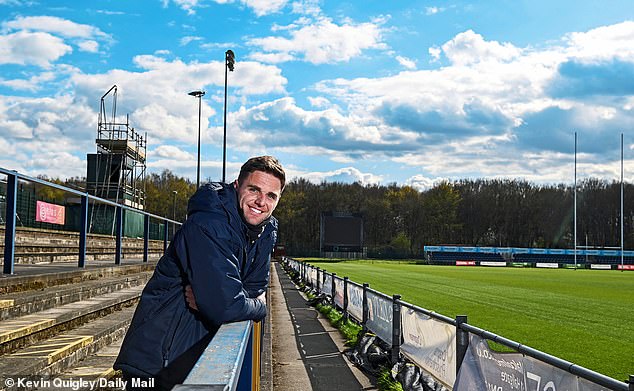 ‘They might as well bring everyone!’ adds Ford, older brother of England fly-half George, the Doncaster backs coach having retired from playing at Leeds last season.

The Fords and Farrells go way back, with the families living next door when fathers Mike and Andy were at Saracens.

‘I went to St George’s in Harpenden with George and Owen so we’d walk to school together,’ recalls 30-year-old Joe.

‘We’d kick every day, throw a ball about in the street. George wanted to get his work done and then play – he was very proper about that. Owen was more about throwing a ball around. He will be up for this. He’s one of the best players in the world.

‘Maybe the younger Saracens feel the pressure of having to get promoted, but what these England lads have done it’s not going to be a problem coming to Castle Park is it?’

As Farrell and his Saracens file through the ground’s main entrance they will be greeted by a hulking statue of a proud knight on horseback.

The warrior – in full battle array with shield and sword – has been welcoming travellers to Doncaster, named the Knights, off the Armthorpe Road since 2009 when he was saved from a Hull scrapheap. 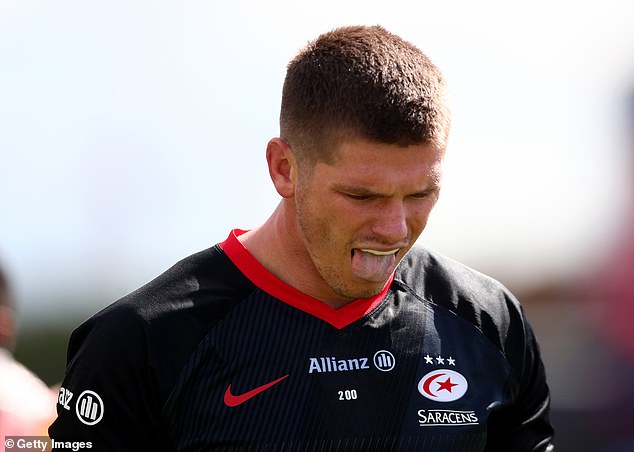 Elite top-tier rugby union up here has been left at the tip for years, since the then Leeds Carnegie, now Tykes, dropped out of the Premiership in 2011.

But Doncaster are ready to fly the Yorkshire flag after Leeds’ last Championship season ended with them winless, relegated and in financial meltdown.

‘When at Leeds Doncaster were always below, so I was a bit “ugh” about them,’ explains Ford, who played for the other Yorkshire side in four stints between contracts at Northampton, Sale and Leicester. But it’s a lot more of a solid club than Leeds. It blew me away.’

Doncaster never really expected to challenge for promotion this year, but with half the season gone are second behind Ealing Trailfinders, five wins from five.

Having refused potential promotion in 2016, benefactor and president Steve Lloyd not prepared to play in the Premiership with its unequal funding model, with the drawbridge closing they might reconsider.

‘This club is ready to go – look at the facilities,’ says Ford gazing across the lottery-funded Castle Park campus owned by the club which can host 5,000 fans and boasts a 4G training area next to the main pitch, a gym, physiotherapy suite and big grandstand with corporate boxes and meeting rooms within.

‘What they’ve got here is better than Leicester’s training ground. If you put a temporary stand on one side it’s not too far off Saracens’ stadium.’

Doncaster look prime candidates for expansion. Eighty miles from the nearest Premiership team in a county with more union clubs than Wales, Yorkshire is crying out for a team worthy of allowing the white rose to blossom.

Both Knights benefactors, Lloyd, whose Helsey Group company sets up specialist schools for autistic children, and Tony de Mulder, who makes his fortunate in waste food-recycling, sit around the top 50 richest Yorkshiremen worth around £100m each. 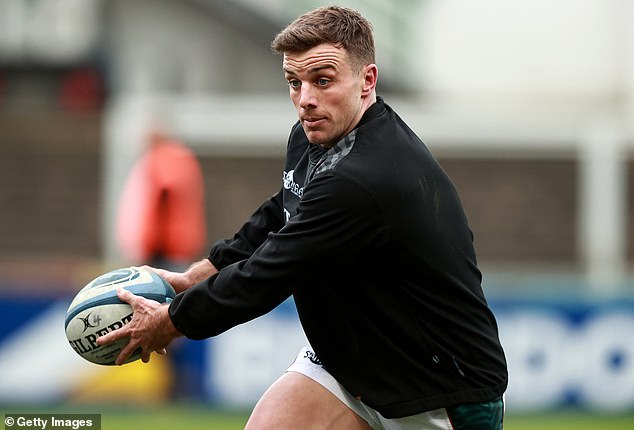 ‘Steve thinks “why do I want to stop here?”’ says Ford of his new club who jumped from levels eight to two between 1993 and 2005. ‘He’s got the money, could click his fingers and fund it, but doesn’t want to go up until it’s fair.’

Currently Doncaster are the 14th best side in England, but before their opening-day victory away at Ampthill they ate home-made pre-match meals from Tupperware in an M1 service station carpark.

‘No wonder we looked lethargic!’ laughs Ford with gallows humour. They are tired of being looked down upon.

‘If they need to ring-fence to protect Premiership teams I get it, but you need to protect the Championship too,’ says Ford, with experience of both.

‘The Premiership A League is an absolute shambles. Leicester would ring up Loughborough hours before kick-off on a Monday night, asking for players. You’d get 3rd teamers as the 1sts play on Saturday. How’s that good for an academy kid to play against?

‘The Championship has meaning on the games and is more competitive. I don’t think there’s a better environment for young players.’ 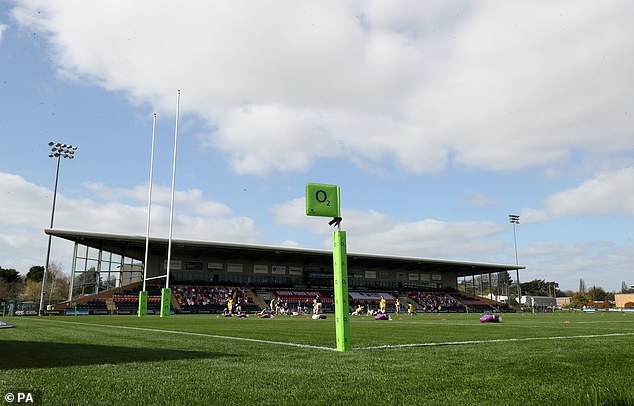 Similarly, without a top team, rugby union in Yorkshire will wither on the vine.

‘It’s sad,’ says Ford. ‘Sale are trying to take kids from here, but Leeds have set up an academy so will say no and the RFU won’t allow it.

‘So Leeds have a player until he’s 18 but then they have nowhere professional to go. At Sale they’d be pushing the first team. Young kids will go to Leeds Rhinos in league instead.’

Despite all the challenges, Ford is loving coaching Doncaster. Coaching is in his blood, with father and Leicester coach Mike showing his boys the way.

Joe reckons George will follow him into a tracksuit. At 21 their younger brother Jacob is already head coach at Bury St Edmunds – the youngest ever to earn an RFU Level 3 coaching badge.

But while the brothers’ coffee shop in Saddelworth, named ‘Kobe’ after Joe’s son, is thriving since opening in December the Fords are not about to combine coaching forces. ‘We all think too similar!’ laughs Joe.

For now he will concentrate on his new career and going into battle against Saracens with his northern Knights, a match that will be watched by Lions coaches Gregor Townsend and Steve Tandy.

‘No one gives us a chance,’ he concludes. ‘But everyone wants to beat ‘em don’t they?’