Essendon and North Melbourne have joined the exodus of AFL teams out of Victoria and will play their match this weekend in Queensland.

AFL sources said the Bombers and Roos would fly out on Thursday afternoon and play their match in Queensland on either Saturday or Sunday, most likely at Metricon Stadium on the Gold Coast. The game was originally fixtured for Sunday afternoon at Marvel Stadium. The AFL is considering a double-header, probably at Metricon Stadium, to deal with the fixture and broadcast difficulties. 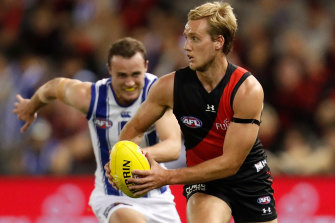 Essendon’s clash with North Melbourne is set to move to Queensland.Credit:Getty Images

The Giants, Swans and Bulldogs had already left Victoria in a scramble to play in Queensland this weekend and there is a strong possibility, subject to the COVID-19 situation in Victoria, of those clubs remaining in Queensland for a period of time.

The Bombers could play their next two games against GWS and Sydney in Queensland. The Dons have already played seven games outside Victoria this season.

Club sources are of the view that the AFL is trying to diversify risk by not having too many teams in one state at a time. The AFL is keen to ensure upcoming fixtures can proceed as it works through the logistics.

Club sources players have been told to prepare for the possibility of several weeks on the road. 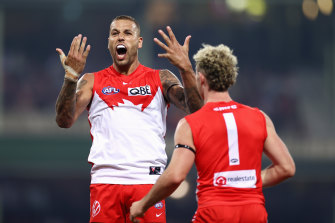 The Swans and Giants are on the move again.Credit:Getty

This weekend’s Sydney derby will also be relocated to Queensland, with the Swans and Giants on the move to dodge another COVID-19 outbreak, having initially left NSW for Victoria.

Both teams were heading to Melbourne airport on Thursday morning to board a chartered flight to Brisbane after the decision was made to shift the two teams at about 9pm on Wednesday as the coronavirus situation in Victoria worsened.

The Western Bulldogs also announced that they would head to Gold Coast earlier than planned, leaving Melbourne on Thursday morning ahead of their match on Saturday afternoon.

The two Sydney-based clubs have been staying in Melbourne for the past three weeks because of the outbreak in NSW. Discussions had been taking place between the clubs, the AFL and state and territory governments about reuniting players and staff with their families.

Sydney CEO Tom Harley told SEN they were uncertain when or where the game was to be played at this stage over the weekend, although he knew it was against the Giants somewhere in Queensland.

The game was scheduled to be played at Ballarat’s Mars Stadium at 1.45pm on Saturday. The Gabba is available to be used if the match was to remain in that time slot. There is a match at Metricon Stadium starting 4.35pm.

A source familiar with the situation said the move was made so that both clubs could continue to live without restrictions, having been able to live freely in the Victorian capital.

Officials from both clubs have publicly said this week they were expecting to be away from home for the rest of the home-and-away season though neither team would have been anticipating a move so soon to Brisbane.

It’s unclear at this stage what impact the escalating COVID-19 situation in Victoria will have on the remaining games scheduled for round 18.

Tags: Dons:, in, play, Queensla, Roos, to
You may also like
Latest Posts