Manly chairman Scott Penn still wants the club’s spiritual home at Brookvale to be the first cab off the rank for Sydney’s stadium upgrades despite construction of a new venue at Penrith expected to begin next year.

The Panthers are likely to be the first beneficiaries of the state government’s decision to reallocate funds from Stadium Australia towards suburban venues. Business cases will be prepared for sites at Kogarah, Brookvale and Penrith, with the Panthers’ home of BlueBet Stadium firming to be turned into a brand new 25,000-30,000-seat arena. 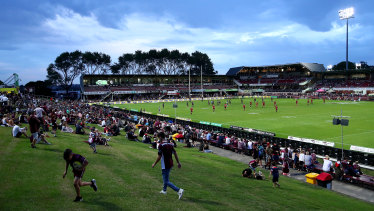 The Sea Eagles are calling for money to redevelop their home ground.Credit:Getty

“To have that in the heart of Brookvale, it’s the right time.”

Penn said a new stadium would secure the long-term future of the club on the northern beaches.

“Absolutely,” he said. “It’s our spiritual home, we don’t want to go anywhere and have never really entertained going anywhere. At the same time, we have to compete in the modern game where every other team is playing out of a modern stadium.

“For us to compete we have to do the same.”

ARLC chairman Peter V’landys is an advocate for boutique grounds in a bid to build tribalism and has previously spoken of his desire to see “three or four mini Bankwests” constructed.

“There will be some funds spent on ANZ, but the majority will be spent on suburban stadiums,” V’landys told 2GB on Friday. “The government has committed to doing business cases for three of them: Brookvale, Penrith and Kogarah. Once they are complete they will make announcements to what grounds will be done. The suburban stadium strategy is the right one.

“I’m not discounting any of them and we also want one out at Liverpool where we could have the Bulldogs and possibly the Tigers.”

It appears the Wests Tigers may again have to wait for upgrades of their home grounds at Campbelltown and Leichhardt. Inner West Council mayor Darcy Byrne said Leichhardt was the venue that most deserved immediate attention.

“This government’s most persistent policy is its refusal to support the upgrade of the most popular suburban rugby league ground in Australia,” Byrne said.

“The simple fact is that [Minister for Western Sydney] Stuart Ayres wants an upgrade to a facility in his electorate just like Mike Baird and Tony Abbott wanted to deliver money to Brookvale on their patch.

“The problem is they are not listening to what the fans want. Survey after survey of league fans from all clubs shows Leichhardt Oval is loved by all fans of the game. If we don’t get some assistance with upgrading the ground, the truth is it will disappear from the NRL schedule.

“If they upgraded it a decade ago, like they should have, they could be playing six games a year now.

“It’s not a coincidence that the government has not only failed to fund Leichhardt but also Campbelltown as well. We’ve been dudded every step of the way. We’re sick and tired of being neglected and forgotten.

“We need the government to stop funnelling money into Liberal Party electorates.”

Tags: don’t, forget, Manly, US, wants
You may also like
Latest Posts