It’s premature to call an end to Richmond’s era of dominance, with the Tigers determined to put their mark back on the competition this year, veteran Jack Riewoldt says.

And he warned there was a sense that Dustin Martin was determined, like his side, to get back to where he was as the competition’s pre-eminent player before suffering a serious kidney injury last year. 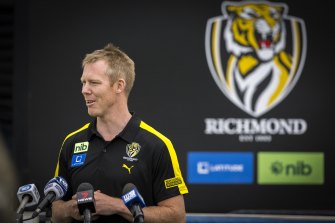 Jack Riewoldt says Tiger time is not over yet.Credit:Chris Hopkins

“He’s got a bit of a buzz around him at the moment and I feel like maybe there is a little bit of hunger there to get back to where he was,” Riewoldt said.

“The way we’re using this year will be interesting as well. We may push him into the midfield a little bit more to see if we can get that bull from 2017 back again.”

In a difficult year physically, Martin has also been grieving the death of his father Shane in New Zealand.

After finishing 12th last year, Riewoldt said he understood the discussion around whether it was the start of the fall, but he was confident the Tigers could return to premiership contention. 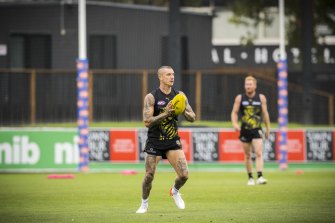 “I think there’s a real air of excitement around where this group can go. The pundits out there might may write us off and see that 2021 was maybe the start of the downward fall of the Richmond Football Club, but we feel like we’re in a good position,” the full forward said.

“You learn from past experience and obviously 2018 we were flag favourites and were bundled out in the prelim final and I remember Kane Lambert speaking about the year of redemption, and maybe there is a small feel about that, that there is a chance for us to stamp a mark on the competition again.”

The Tigers are yet to announce a new captain after Trent Cotchin stepped down as leader.

Riewoldt said he would obviously do the job if asked but said the club was spoilt for choice and had plenty of options. 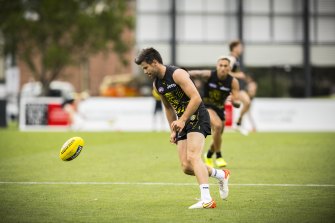 Trent Cotchin has stepped down as captain.Credit:Chris Hopkins

“The one thing I will say with the captaincy is when that person does get announced they’ll have a lot of really strong lieutenants around them,” he said.

“If the club wanted me to do it I’ll just step up and do it. I’ve captained the football club when Trent’s been injured, but there’s a whole host of factors you have to take into account as well. There’s some older players like myself and Shane [Edwards] coming towards the end of their careers.

“Do they want to go for a short-term captaincy? Or do you want to go for someone else who maybe has three or four five years capacity to captain the football club?

“It’s a great strength and a great position to be in that we have got sort of three or four options in terms of the demographic that we want to select from, so we’re very fortunate to be in that position.”

At the draft table at the end of last year Richmond put a priority on foot skills and signalled that they recognised the game was shifting. Riewoldt admitted they had spent a lot of time on skills work this pre-season but said the game style and approach would still be fundamentally the same.

“So that’s really exciting. Fundamentally we’ll still play the same way we just looked to hone our craft and make sure that when round one rolls around our skill base is [where it needs to be[. A really great indicator where you’re going to go is how many skill minutes you can get in and we feel like we’ve got a lot in at the moment. ”

Tom Lynch has a small hamstring strain and ran laps at training.