The Davey twins, Alwyn jnr and Jayden, want to follow in their father’s footsteps at Essendon, as the Bombers continue to debate the merits of taking an explosive midfielder with their first selection in November’s national draft.

Essendon confirmed on Monday that the Davey brothers had officially nominated the club as their choice under the father-son rule. Their father, former livewire Alwyn snr, played exactly 100 games for the Bombers, largely as a small forward, and the twins hope to have a similar impact.

Alwyn jnr had a superb season with the Oakleigh Chargers and Vic Metro, but Jayden could only watch on after he tore an anterior cruciate ligament (ACL) while playing touch rugby in March. 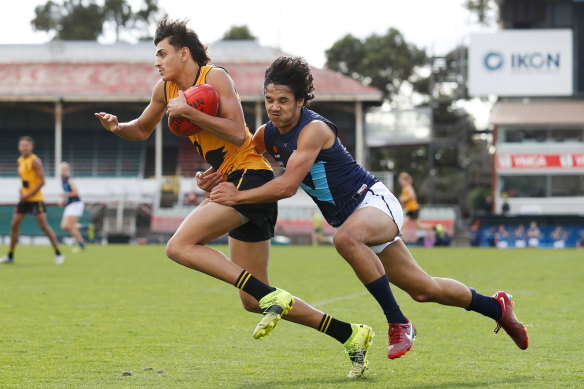 Alwyn Davey jnr (right) has nominated Essendon as his club of choice under the father-son ruling.Credit:AFL Photos

The twins have boarded at Xavier College, with their father remaining in the Northern Territory. Eddie Betts, the former Carlton and Adelaide star, and now Geelong assistant coach, has been a major help for the boys.

The Bombers have pick No.4 in the indicative order of the national draft, with Alwyn jnr regarded by recruiters as a possible mid to late first-round, selection should rival clubs opt to bid. If they do, the Bombers will need to match this. The Bombers, however, will hope he falls beyond their second selection, pick No.22.

Jayden, because of his interrupted season, is seen as a late selection or even a rookie-draft selection, but his upside is strong, according to recruiters.

Draftees have until Wednesday to nominate as father-sons, with the secondary bidding nomination due by November 21. 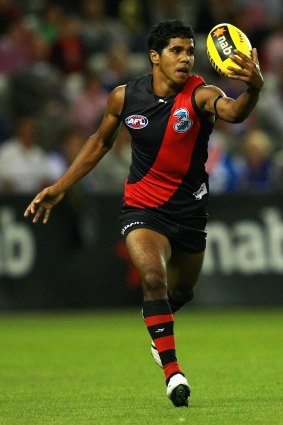 Alwyn Davey snr juggles a mark during his time with the Bombers in 2008.Credit:John Donegan

As clubs sharpen their focus ahead of the November 28-29 draft, rival clubs believe the Bombers are focusing on Elijah Tsatas, the Oakleigh Chargers and Vic Metro star.

While the Bombers have options, Tsatas is high in their thinking, particularly if Greater Western Sydney takes forward Aaron Cadman with the No.1 overall selection, Will Ashcroft is taken with pick No.2 by Brisbane as a father-son, and North Melbourne take forward Harry Sheezel and midfielder George Wardlaw with the following picks.

Tsatas, who overcame a foot fracture through the season, is listed at 186 centimetres and 79 kilograms, and has size, power and pace. He finished the season strongly, averaging more than 30 touches per game over the final month of the season. Recruiters say Tsatas is keen to remain in Victoria.

The Bombers have also been linked with South Australian Mattaes Phillipou, whose father Sam played three games for the Western Bulldogs in 1995. Phillipou, a tall midfielder and an excellent kick, is considered South Australia’s best product in the draft.

Meanwhile, Alastair Clarkson’s first official day as North Melbourne coach is on Tuesday – Melbourne Cup day – but club officials say he is more likely to be at the club the following day.

Clarkson had taken a leave of absence to deal with allegations of racism from his time at Hawthorn – allegations he has strenuously denied and is fighting with legal assistance. This had meant his November 1 start had been in doubt, but this eased when the terms of reference for the AFL investigation were released, and the Kangaroos’ board last week agreed that Clarkson could return, while juggling the investigation’s interview process.