Explosive midfielder Josh Goater has landed at his beloved North Melbourne after sliding from last night’s first round.

The Calder Cannons product was rated by some as a top-15 talent and could have considered himself unlucky after going undrafted in the early stages. But fortune soon turned for the Kangaroos supporter as the club pounced with pick 22.

“I’m absolutely over the moon — I’ve followed North Melbourne my whole life,” Goater told Fox Footy. “I’m stoked to be able to be at that pick and land myself at that club.” 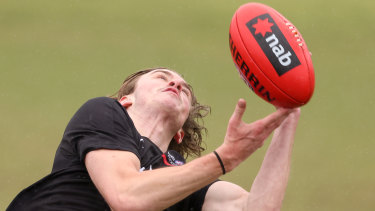 After looking up to his North Melbourne heroes, now Josh Goater gets the chance to line up alongside some of them.Credit:Getty Images

At 190 centimetres, Goater uses his athleticism to break away from stoppages and calls on his leap to mark around the ground. He is blessed with a burst of speed and shapes as a prospect with significant upside.

Goater’s height means he could also start AFL life as a forward, where he played much of his junior football.

“I was a forward all my junior career,” he said. “Drew Petrie was someone I always looked up to.”

The pick came after Fremantle kicked off round two by selecting local product Matthew Johnson.

Hawthorn considered the West Australian midfielder at pick seven, but he slid into the second round as clubs in the back half of the opening 20 opted for positional need instead.

Johnson, despite standing at 192cm, is more of an outside ball-user than a big-bodied on-baller and impressed with his class throughout the season. He was adjudged best afield in a state match against South Australia before the AFL grand final.

The selection means the Dockers bring in a trio of highly touted local prospects after drafting Jye Amiss with their initial pick and Neil Erasmus at choice 10. Johnson and Erasmus are both tall midfielders but play in a different style, with the latter known for his work in the clinches. The pair will help fill the midfield void left by Adam Cerra.

The Hawks swooped on Sam Butler at pick 23, who found himself in the second round after many thought the Giants would select him at 15. A clever midfielder-forward and the brother of St Kilda’s Dan, he is likely to start his career on the flank of the attacking 50.

Coming into draft night, the Cats were always keen on Conway and he will land at Kardinia Park as a long-term solution to the club’s ruck woes. The best pure ruckman in the draft, Conway uses soft hands around the ground to give his followers first use at the coalface.

At 193cm, Knevitt’s height as a midfielder is appealing but he also proved prolific in a limited season, particularly through a 36-disposal game in the NAB League. He was a strong performer in a recent two-kilometre time trial and is another prospect whose athletic makeup provides him with the tools to develop into an imposing player.

Hawthorn then selected ball-hunting midfielder Connor MacDonald with pick 26, before the Blues bolstered their small forward stocks with Jesse Motlop.

Motlop narrowly missed father-son qualification for Port Adelaide — father, Daniel, played 83 games for the Power and 47 for North Melbourne before that — but the South Fremantle talent often shows his pedigree with the same x-factor and flair.

The small forward’s skillset is well documented, but his leadership knack is a lesser-known factor. He was renowned within the WA setup as a player who spoke up in team meetings and recently told The Age he was raised to be a leader.

Sonsie played a senior VFL match for Box Hill earlier this year and impressed with 21 touches and two goals, but was troubled by injury for much of the season’s remainder. Banks, a Tasmanian, is a damaging half-back flanker, while Clarke is a fleet-footed small forward with innate goal sense. The trio joins Josh Gibcus and Tom Brown in the Tigers’ impressive draft haul.