Luke Dunstan couldn’t hold a permanent place in the best 22 for a middle of the road team, so why would he fit in the best team in the competition?

Firstly because St Kilda and Melbourne’s teams are different, and what they need from the inside midfielder is different. 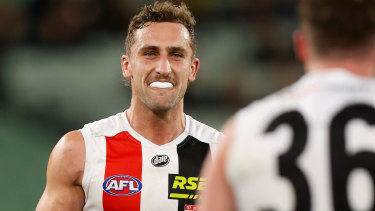 But Richardson can at least vouch for other aspects of the Dunstan package – what he is like as a person, trainer and teammate. Richardson likes him.

His kicking and running counted against him at St Kilda.

The Demons pride themselves on their contested football winning them games more than neat kicking or fast running. They play a game where winning starts with having more players who can win the ball more often than their opponents. And Dunstan is elite at winning the ball.

So, will he be in Melbourne’s best 22 in round one?

That is a question best asked by Simon Goodwin of his premiership players.

An impediment to Melbourne winning a back-to-back flag next year is complacency.

Dunstan is like a Berocca before bed – he might just take the edge off a hangover. His arrival enables Goodwin to challenge his group to say “this player is an elite ball winner. He is not just here for depth – he is here to take you on for your spot”.

Dunstan is in a good age profile – he’s 26 and has played 116 games. He does not command a big contract, and he doesn’t cost a draft pick as he comes for nothing as a free agent.

So, in the worst-case scenario, he gives the Demons depth. He gives them comfort to know that if they don’t have a year again like this year, when they do not get injuries to their best midfielders, then they have a replacement ready to go.

Impressive young mid James Jordon missed only the qualifying and grand finals. He, like Dunstan, starts pre-season with designs on round one.

The other thing of Dunstan, which is fresh in every Brownlow viewer’s mind, is that when he played this year he dominated and got Brownlow votes. Then got dropped again.

Tags: cure, Dunstan, hangover, THE
You may also like
Latest Posts