A lot has changed in the six years since England thundered through Australia on their last tour down under. Eddie Jones arrived on Wednesday very much the man under pressure.

The eyes smiled under the mandatory mask at Perth Airport. Like any returning Australian, there would have been part of Jones that reflexively relaxed upon re-entry to the vast skies of his home country.

But there is nothing relaxed about his position as England coach in his seventh season and Jones’ defensive rhetoric on the eve of his departure spoke volumes about how he is positioning this England team.

“It is completely different conditions, really hard flat tracks, abusive crowds. The Australians are in the face. The media are going to be in our face. They are aggressive. It is a really aggressive environment. You can learn so much about your players and your squad on those tours, and we’ve missed that,” Jones told the English media before hopping off the marathon London to Perth flight this week.

“Abusive” Australian crowds? Sold-out games? Wrong on both counts. England will trickle, unheralded, into Perth in the middle of the AFL season. Ticket sales for the first Test at Optus Stadium – sold out for the State of Origin clash on Sunday – were soft until recently. On current projections, the 65,000-seat beauty will be a good measure short of capacity. 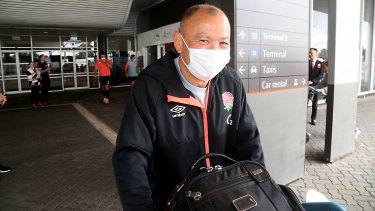 But Jones has never let the truth get in the way of a useful narrative. At the same point ahead of England’s 2016 tour, full of vigour at the start of his time with rugby’s richest union, he went on the attack, wielding the phrase “Bodyline rugby” as if it were a weapon, turning a juvenile media stunts into ammunition for his own cause.

Back then, England were coming off a Six Nations championship. This time, they are coming off consecutive poor campaigns, Jones just surviving the dissatisfaction of the RFU board after this year’s showing. A few days before their departure, England – missing a portion of their regular starters, granted – were embarrassed by the Barbarians at Twickenham. The English press are the aggressors, Clive Woodward and Stephen Jones his most trenchant critics.

Most observers expect this series to be tight. No repeat of the 2016 Australian collapse even Michael Hooper still wonders about today, but fans expecting rugby’s version of the summer’s Ashes exploits will be disappointed too. Jones listed 10 players unavailable through injury yet there is quality in those who made the cut (Owen Farrell, Marcus Smith, Danny Care, Courtney Lawes, Maro Itoje, Tom Curry, the Vunipola brothers, Ellis Genge and Jamie George), including 10 from the 2016 tour. Still, if England were to lose 3-0, it is hard to see a scenario in which Jones would survive.

Pity the opponent who entertains notions of Jones and England on the wane. In 2018 the Australian was under similar pressure on a three-Test tour of South Africa. England lost the series but the nature of the third-Test win – probably, too, the cost of paying out a coaching staff and the lack of a better option – saved Jones. England dropped just three of their next 19 Tests, stumbling finally against the Springboks in the 2019 World Cup final. 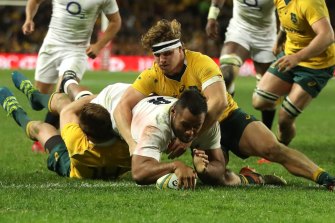 Few are predicting a reprise of the 3-0 walkover of England’s last tour.Credit:David Rogers

The Wallabies will have to survive an aerial assault from England’s backs and a physical one from its pack, which has been boosted by the recall of No.8 Billy Vunipola.

What of the Wallabies? They’re working away on the Sunshine Coast, leaving their trip to Perth until the last feasible moment (Thursday next week). Dave Rennie is wringing the seconds from each minute inside Camp Wallaby. The day the players arrived, they were put to work in their civilian clothes instead of being left to mill around waiting for check-in. Rennie would usually name the team internally next Monday but has brought it forward two days to give his combinations maximum time in the saddle.

He has challenges of his own, Taniela Tupou’s calf injury chief among them. There is pressure to produce a series win, after 20 Tests in charge and fewer than that before next year’s World Cup. The Wallabies have won three Tests from 15 encounters with England since 2010. Just like Jones, Rennie has key positions – fullback, five-eighth, hooker – not quite nailed down.

But he is not coaching for his survival.

Watch every match of the July Test Series on the Home of Rugby, Stan Sport. Kicks off Saturday, July 2 with Wallabies v England, New Zealand v Ireland, South Africa v Wales and Argentina v Scotland. All streaming ad-free, live and on demand only on Stan Sport.