Parramatta, Newcastle and Gold Coast have signed on to take part in the NRLW competition which will expand from four to seven weeks this year.

On Friday morning, NRL boss Andrew Abdo announced the number of games will increase from seven to 18 in 2021, with an objective to have eight teams next year. 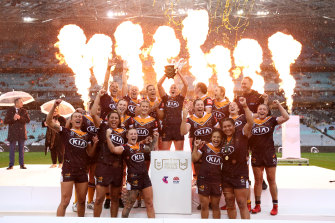 The Eels, Knights and Titans have signed on to take part in the expanded NRLW competition. Credit:Getty

The Warriors, who have taken part in the competition since its inception in 2018, have pulled out this year, but plan to be back for 2022.

Given the Warriors have been based on the Central Coast this year and last due to COVID-19, Abdo said participating in the women’s game this year would prove “too much of a train” for the club this year.

The women’s game will start alongside the men’s round 23. Each team will play each other once and the top four teams will play in the semi-finals.

The NRLW decider will be played on the same day as the NRL grand final.

Tags: and, Eels, join, Knights, Titans
You may also like
Latest Posts