Parramatta firebrand Isaiah Papali’i believes the Eels have the weapons to “rattle the cage” of Penrith as the great western Sydney rivals fight for their respective seasons on Saturday night in Mackay.

After South Sydney punctured the long-held theory that this year’s premiership was a race in two when they stung the Panthers last weekend, Parramatta are gearing up to repeat the dose after they progressed via a win over the Knights.

Panthers half Nathan Cleary promised after the upset loss that his side wouldn’t backtrack on the systems and attacking style that had served them so well over the past two seasons. And with fullback Dylan Edwards returning with his multi-layered game, Penrith will go on as heavy favourites to set up a date with the Melbourne Storm in the preliminary final.

But Papali’i watched the way Souths went about their business with interest as the Panthers were confronted head-on through the middle of the field and swamped with rushing defence on the edges. That’s the sort of aggressive style the Eels should bring through the likes of Regan Campbell-Gillard, Junior Paulo and Papali’i from the interchange ranks.

“You’ve got to take it to them and rattle the cage a bit. They’re a bit of a silky side and play very nice football, so you have to be aggressive and put them off their game,” Papali’i said. “It starts up front and I’m sure the starting middles from both sides will do their part. I’m looking forward to contributing.” 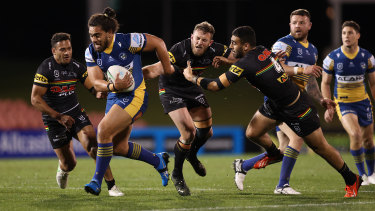 The 22-year-old has been a terrific hire for the Eels in 2021 after he made his way from the Warriors. He’s averaged almost 150 metres per game and provided some power running when used from the bench after taking what he described as a ‘leap of faith’ in joining the blue and gold.

He said he has grown up immensely this season at the Eels and had made a vow not to waste another moment and make it count after moving away from the comfort of his family and friends.

“It’s just understanding the sacrifice of coming here and also just knowing that I could have done better throughout my years at the Warriors and knowing that it led to me having to leave to figure out that I wasn’t preparing the best way I could,” Papali’i said.

“I know that’s not the right thing, this is the right thing to do. It became black and white for me. I guess I’ve just matured. I was very uncomfortable leaving my family so I want to make sure that was all worth it.

“I want to make them all proud back home and show to them I’ve made the most of the leap of faith.”

Belief is infectious at this time of year and Papali’i insists there is no shortage in the Eels camp as they try to knock the Panthers out of the running in straight sets.

“We felt like Souths had that same kind of mentality. They got on top of them. They can be beaten. We just have to go out and believe and do it.”

Tags: ‘rattle, cage’, Eels, THE, to, want
You may also like
Latest Posts