The future of Waratahs coach Rob Penney was among the topics discussed in an emergency meeting of a NSW Rugby high performance panel on Tuesday night. 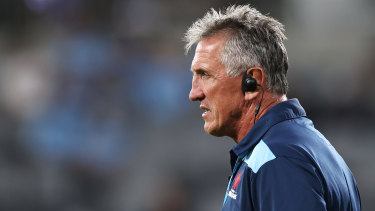 Rob Penney watches his players warm up before their 20-16 loss to the Western Force. Credit:Getty

Sources with knowledge of the situation told the Herald one of the purposes of the meeting was to determine whether the Waratahs’ dire form would be fixed if a new coach replaced Penney for the remainder of the season, or whether Penney should be backed until at least the end of the season.

Sources told the Herald the group were mindful that sacking a coach would not fix the issues at Daceyville if the players were not up to Super Rugby standard.

The high performance panel, who were due to review the entire Waratahs’ program and not just the coach’s performance, will present recommendations to the NSWRU board. The next NSWRU board meeting is scheduled for April.

One source told the Herald there is no rush to resolve the situation “in the next 24 hours” but the meeting was called to provide both the Waratahs and NSWRU with “a little bit of certainty”. The Waratahs have the week off with a bye in the Super Rugby AU competition.

Davis, the long-serving chairman, returned from a 10-day Tasmanian hiking trip on Monday.

Multiple sources told the Herald Davis sought the views of several directors on the NSWRU board and chief executive Paul Doorn before meeting with the high performance panel.

The same review group met after Penney’s first season in charge and while the Kiwi coach kept his job, sources with knowledge of the meeting told the Herald the group had discussed Penney’s suitability to continue in the role.

The group have stayed in touch in the months since and, after a third consecutive loss to start the season, were called in to reassess the situation during the Waratahs’ bye week.

The Waratahs players will return to training on Thursday.

There has also been speculation regarding Davis’ future as chairman.

Davis has chaired the NSWRU board since 2012 and while Penney is currently the man under the most pressure, the finger has also been pointed at the chairman for overseeing the downfall of a club that won a Super Rugby title just seven years ago. The financial strategy that has seen the Waratahs spend a million dollars less than rivals clubs in 2021 has been called into question.

Davis did not wish to comment when contacted by the Herald on Tuesday but did not rule out stepping down at the end of the year, provided the club finds a way out of the current crisis.

Giteau dismissed the Herald’s report of his impending move as “paper talk” last year but the new Major League Rugby club confirmed the signing on Tuesday.

“I still love to play and compete. What will give me just as much satisfaction is helping to create the identity of the Giltinis and developing the potential in some excellent American and international youngsters for the club’s future,” Giteau said.

“I feel I know what successful clubs look like… you need strong leaders and you need to establish what you stand for early on and off the field.

“If you stick to those standards it becomes habitual for those who follow in the seasons ahead.

“With good people, you create a family feel at a club and you do more than normal to protect that and not let the club down.”