The Women’s Six Nations may have been reshaped and rescheduled but its final image was a familiar one. It had been billed as a meeting between the Women’s Six Nations’ two heavyweights in the final of this competition and so it would prove to be as each side swung wildly at the other throughout a brutal 80 minutes.

In the end, it was England last on their feet, Emily Scarratt’s final-minute penalty sealing a 10-6 victory as England outlasted an impressive France and claimed a third successive Six Nations victory in an inaugural final, trophy again hoisted high into bright blue springtime skies at the Twickenham Stoop.

With both sides having largely cantered to comfortable victories in their two group games, this was a game cut from very different cloth, a battle fought mostly around the fringes and on the floor as defences dominated and neither side found the sort of attacking flow of which they are capable. Each side will certainly play better, perhaps when they meet again under different circumstances across the Channel next week.

England survived an uncharacteristic off-day from Scarratt with the boot, the outside centre missing two first-half penalties, including one from right in front of the posts, after struggling with an ankle issue in the week before departing for a Head Injury Assessment.

It was a first half in which clear cut opportunities were few and far between as messy breakdowns stymied attacking patterns as well-drilled defensive units . France, arguably, had the better of it in an offensive sense, particularly when able to get impressive second rows Safi N’Diaye and Madoussou Fall on the charge and offloading hands free.

Indeed N’Diaye was irrepressible for seventy minutes, a constant carrying and defensive threat with deliciously deft hands, and her combination with Caroline Boujard and Laure Sansus down the left moved France down into the England 22 in the best attacking moment either side put together before the interval.

Rose Bernadou powered further onwards and playing under advantage, Emilie Boulard had appeared to have sprinted through for an opening score just before the half-hour mark, but Romane Menager’s pass was ruled just forward to set the free-striding full-back away. Caroline Drouin followed Scarratt’s lead by sending the relatively simple penalty wide of the upright.

As the clock ticked towards forty it appeared this unique Six Nations final may have a fittingly novel pointless first half, but on the half-time whistle England found the opening score With Scarratt back on the field, England moved into the French 22 with a series of breakdown penalties. After a series of phases Marlie Packer very nearly found Poppy Cleall with an offload from the floor, but from the resulting scrum England struck.

And it was Cleall, rated as perhaps the best player in the world at the moment by coach Simon Middleton, who found the first fissure, tapping a free-kick quickly and sending Zoe Harrison to within a metre from her shoulder, before chiseling her way over from close range. Scarratt added the conversion.

France would have rued such a late concession in a half they otherwise managed well, and re-emerged from the tunnel several minutes before the hosts. That set the tone, rather, for the opening skirmishes of the second half, with Cleall dropping the restart and allowing France territorial advantage. 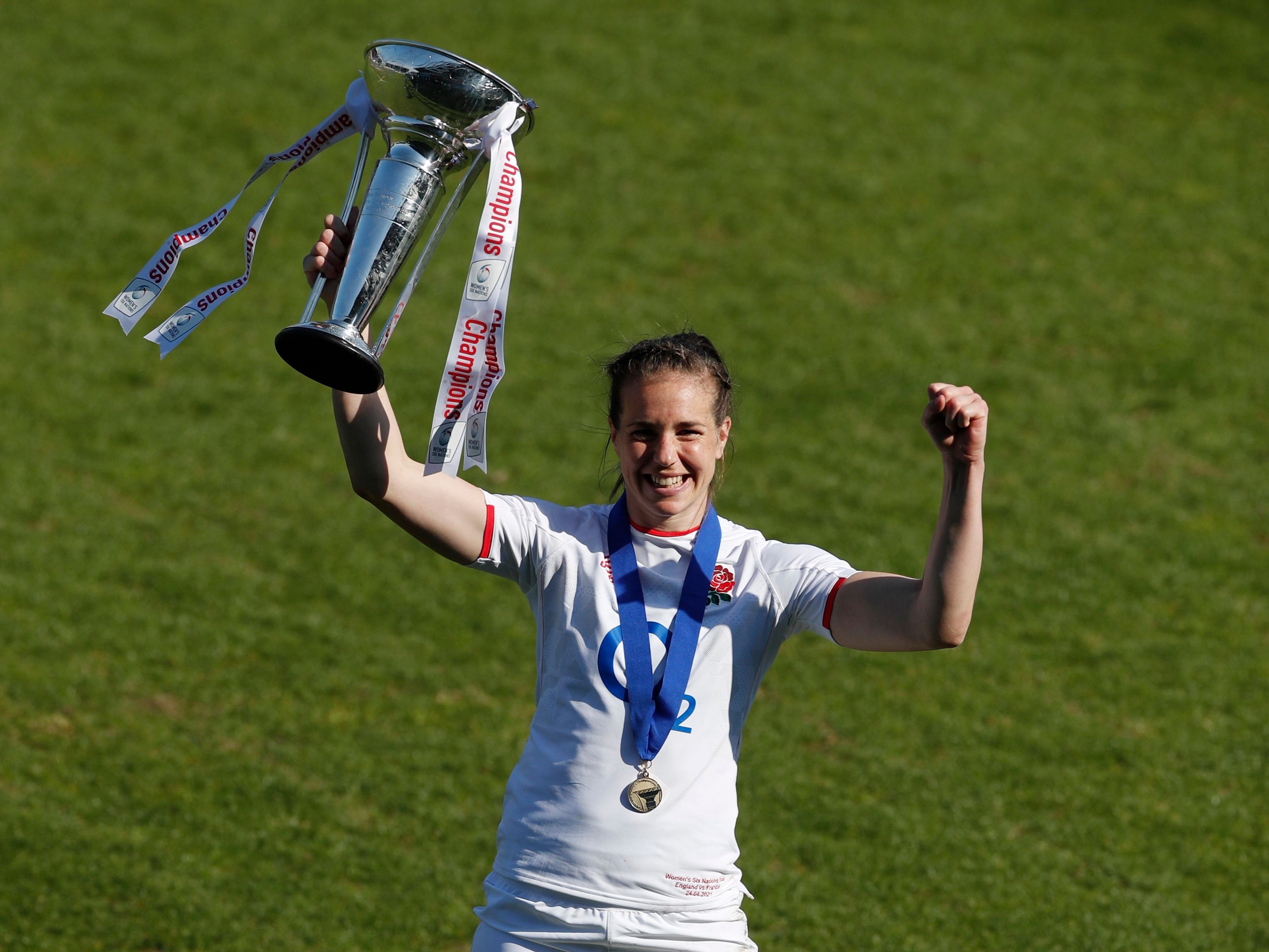 The French scrum, dominant throughout, drew the whistle of referee Hollie Davidson, and though Drouin could only strike the left-hand post with her first attempt from the tee, a subsequent breakdown penalty against England was successfully slotted between the uprights.

When England’s restart drifted out on the full, it appeared momentum had truly swung, and it was little surprise to see Simon Middleton call swiftly for regular captain, and 125-capper, Sarah Hunter with half-an-hour to go in what was now an increasingly error prone game.

After Drouin had put them on the board it was another twenty minutes before France ventured again to the edge of England’s 22 as each side struggled for control and cohesion, the pressure of the occasion and the ferocious nature of the contest meaning few moments of attacking invention were allowed.

When France did finally refamiliarize themselves with more promising attacking areas, England were dealt a blow as Poppy Cleall was forced off before the resulting lineout, her heavily strapped left elbow in a makeshift sling and the number eight clearly in some discomfort. And there were questioning looks from some in English white as Bernadou, who had departed, surprisingly, just before half-time, returned to take her place amongst the French eight with replacement tighthead Clara Joyeux unable to continue.

Hunter’s canny intervention pried the ball free from French hands to prevent significant initial progress but England failed to fully clear, and a holding on penalty allowed Drouin to pull the visitors to within a single point, her crisp strike taking a coat of paint from the inside of the post on this occasion.

That was as close as France came, however, thrice falling foul of Davidson’s whistle in the final five minutes and allowing England to see the game out. And as it had in the autumn at Twickenham, it was the flow of Scarratt’s right boot across the top of the tee that provided the final, telling strike; the Women’s Six Nations crown a battered, bruised England’s again.