It was a bonus-point victory for Simon Middleton’s side, who shared the glory around.

In response to that, and a penalty try for England, Scotland’s only response was through Hannah Smith, with Molly Wright sent off for the Scots.

Here are the player ratings from Castle Park:

McKenna was strong and solid for England. Her performance was even more impressive as she returned from injury in the match.

She found herself in the right positions but couldn’t quite get on the end of a cross field kick to score. Slick but not clinical enough.

Captain fantastic Scarratt was clinical and precise as always. She missed one conversion but two of her other kicks were pin point from a difficult angle.

Everytime she got the ball in hand she looked dangerous. Made great metres and played as well as she does for Harlequins week in, week out.

Phenomenal skill from the winger saw her collect a cross field kick and storm to the line for England’s fifth before half-time. She continues to impress in a white shirt and at just 23 fans will be excited for all the rugby there is to come from the winger. 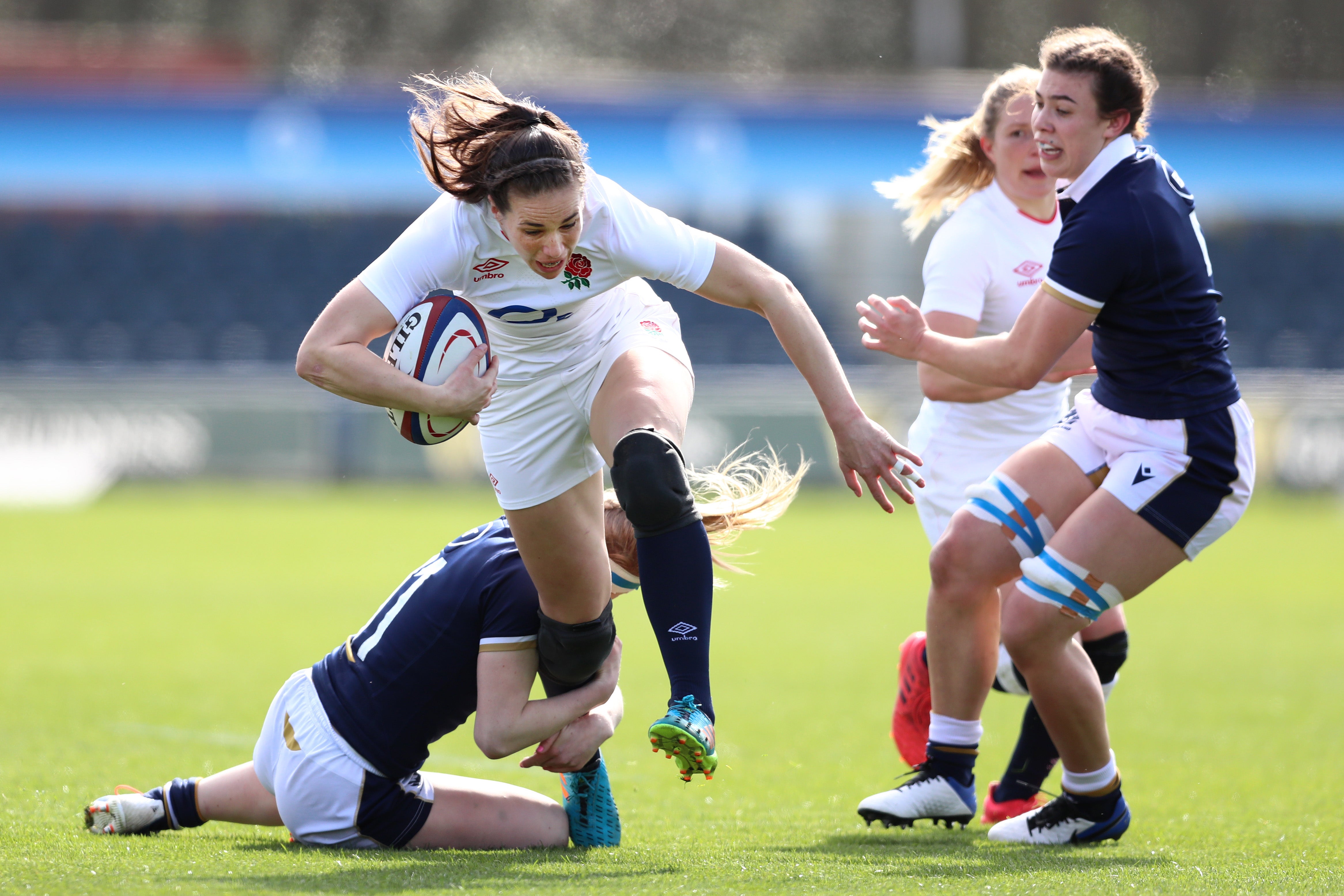 Emily Scarratt of England is tackled by Megan Gaffney of Scotland

Rowland had some cross field kicks which had too power much on them but she cleared her lines well. She scored a great try early in the second half and did well following in the footsteps of the retired Katy Daley-Mclean.

While the scrum-half knocked the ball on, she did well to score the second try.

Solid as ever at scrum time and a dependable player for England.

Davies’ line-outs were clean for the most part and she finished off a good maul try. A yellow card in the second half for a high tackle put a blemish on her performance

After injury has kept her out of the England team for a while it was great to see her go over for a try.

A dependable leader in the England team which was needed when Scarratt was subbed off.

A solid performance after a long time away from the international game.

Aldcroft had great hands in the build up to the first try and was everywhere on the pitch.

She made good metres and had an amazing finish to score England’s first try of the afternoon.

Amazing big hits and great at scrum time but a yellow card in the second half let her down. She continues to stun for England and she didn’t miss a tackle this afternoon.

Great work to score Scotland’s only try of the match

A yellow card in the first half led to Breach’s try.

Gaffney wasn’t given enough opportunities to get on the front foot to show what she can do.

Impressive with ball in hand and with boot to ball but Scotland didn’t have enough ball in possession for her to demonstrate her skill.

Solid in the second half when Scotland had some attacking play.

A good performance at scrum time but not quite up to the standard.

The hooker was consistent at the line-out and was one of Scotland’s best players.

A good performance from Belisle but she was subbed off midway through the second half.

A great individual talent. Great in defence and made some great carries.

Her name was hardly spoken in the match, Scotland need more team co-ordination for their individual class players to perform

McLachlan was solid, especially in the second half, and she was accurate in defence.