Former Ten boss and News Corp senior executive Hamish McLennan has emerged as a heavy-hitting candidate for the Rugby Australia board and a potential rival to chairman-elect candidate David Mortimer. 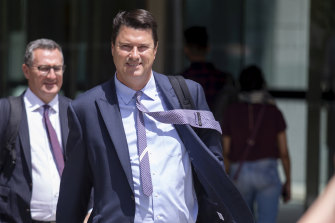 The RA shareholders are in the final stages of agreeing their nominations, which must be published on Monday, 21 days out from RA's March 30 annual general meeting.

Mortimer remains the frontrunner for the chairman’s role but McLennan is considered by some as an attractive alternative, bringing top-notch corporate, media and governance experience to the table, if not a strong rugby pedigree.

His nomination and potential election to the board could have ramifications for RA's broadcast rights negotiations, which are in their final stages under the stewardship of chief executive Raelene Castle and strategist Shane Mattiske.

Sources have told the Herald the candidates for chairman have made it clear they want to be involved with the rights negotiations at as early a stage as possible, and certainly before their formal elections to the board.

Optus, Ten and Foxtel are considered the main players in the process, as well as Qatari-owned BeIN Sports, and so-called 'streamers' DAZN and RugbyPass.

Speculation in the past three months has centred on whether Foxtel, the current holders, will make a second bid for the five-year package of rights, given they made an offer last November during an exclusive negotiation period.

McLennan, who was overseas and could not be reached for comment on Wednesday, has launched an impressive governance career in the past eight years.

He is deputy chair of $92bn investment management group Magellan as well as chairman of media group REA, and Here There & Everywhere (HT&E), the parent company of Australian Radio Network (ARN).

But it is his long history with News Corp and related companies that will pique interest at this delicate juncture in Australian rugby's history.

Before he ran Ten for two years between 2013 and 2015, McLennan was executive vice-president to the office of chairman at News Corp, working closely with Murdoch.

News Corp owns half of Foxtel, the pay television provider that has held the rights to rugby in Australia since it created Super Rugby in 1996.

Foxtel is under significant pressure, under the weight of spiralling debt, to cut costs, with on-air and production staff slashed across a number of sports, including football, rugby league and rugby.

Speculation in News Corp-owned newspapers has suggested the broadcaster is willing to cut ties with rugby, despite its strong history as a subscription-driver.

At RA, former chairman Cameron Clyne's sudden decision to step aside two weeks ago, leaving Paul McLean as interim chair, was interpreted in some circles as a sop to Foxtel, who were angered when Castle and Mattiske – with the board's support – chose to take the rugby rights to an open market process.

McLennan's election to the board would be a significant strategic marker at a critical moment for the sport. He moved from News Corp to chief executive of Ten in 2013, a role he held until 2015.

McLennan has also held the role of global chairman of Young & Rubicam (Y&R), part of WPP, the world’s largest communications services group. He joined Y&R in 2002 as chairman and chief executive of Y&R Brands Australia/New Zealand, one of the largest marketing services groups in Australasia, and led the firm’s global business operations from 2006.

Tags: boss, Ex-Ten, Rugby, shake, to, up
You may also like
Latest Posts