Exeter’s Double dream is alive after their demolition of Northampton sent them to a first European semi-final in their history.

A beauty of a score from Jack Nowell, to add to tries from Henry Slade, Jonny Hill and two for the superb Jacques Vermeulen meant the Chiefs line up against rugby royalty next Saturday here, with Toulouse now between them and the final.

The Premiership’s premier team were huge favourites for this, and delivered despite Northampton defying doomsday predictions of a record defeat thanks to tries from Teimana Harrison and Fraser Dingwall. 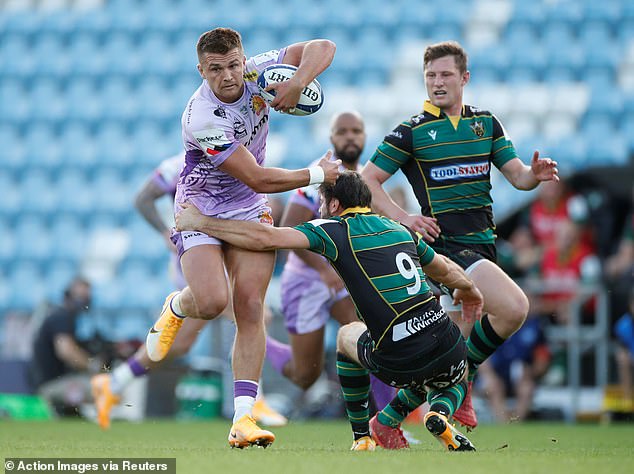 But Exeter advanced and Rob Baxter thinks they will grow against the four-time winners back at Sandy Park this weekend.

‘We can throw it all out there,’ he said of Toulouse.

‘The everything-to-lose feeling was a big test of character for us. Ultimately we need a big challenge to get the best out of ourselves. We’ll be right on it.’ Northampton’s Chris Boyd said: ‘We can’t fault the effort. The boys fought really hard. Exeter are clearly a bit further down their journey than we are.’ Seeing as Saints’ halo had not just slipped since the restart, more been shattered to bits, no one except perhaps themselves thought they could win in Devon. 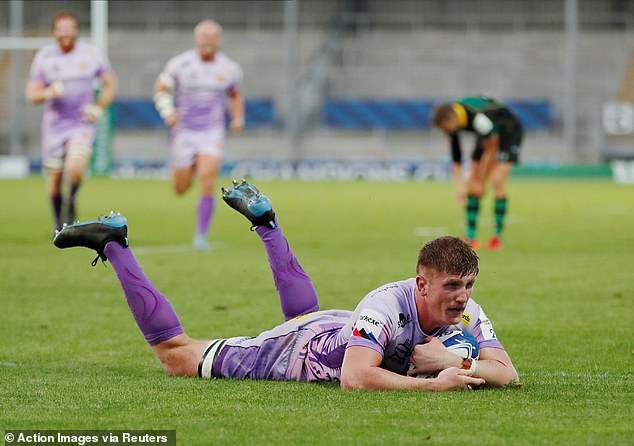 Six defeats in seven and a prop injury crisis meaning they had a 19-year-old on just his second start and a loanee on the bench who had arrived three days earlier saw many bookmakers back Exeter as 20-point winners.

But Manny Iyogun coped admirably for 72 minutes before Alex Seville came on, enough to make Eddie Jones clap the kid off from his seat in the stands.

‘He will sleep pretty well tonight I’d imagine,’ added Boyd on Iyogun. ‘It was a remarkable effort.’ Saints were way rougher and tougher than in any game for months.

Chris Boyd’s boys starved Chiefs of possession, taking 65 per cent of it in the first half, and made them feed off scraps – pity though that Exeter were so ravenous when their chances to bite came.

Two tries meant Exeter led 14-10 at the break. The first was a peach. The pack crunched Saints’ green loosehead Iyogun and marched forward winning the scrum against the head, then Slade showed his oozing class by breaking through Dingwall, avoiding Henry Taylor and feeding Maunder for the try. 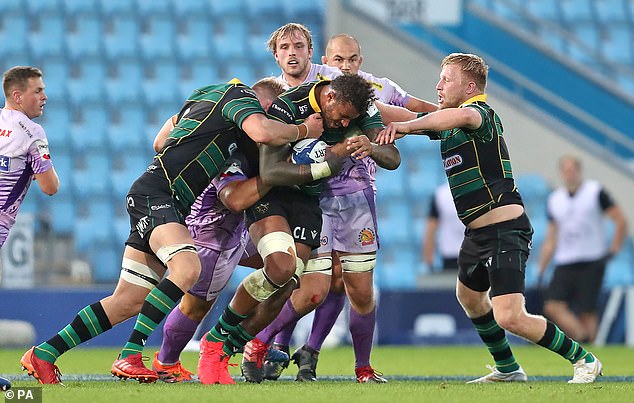 The second was much more agricultural. Vermeulen biffed over on the far side after Luke Cowan-Dickie had tapped and went from a penalty a handful of meters out. Joe Simmonds hit both conversions.

Saints fought on and three minutes before half-time formed a huge maul that splintered the lilac-shirted Chiefs, Harrison the man at the bottom of the pile scoring.

Dan Biggar then landed the touchline conversion to add to his earlier penalty and Northampton clinging on until Nowell led them a merry dance across most of Devon.

Dingwall did manage to drag Northampton closer with a well-taken try after James Fish had fed him through a hole after a lineout, but when man-of-the-match Vermeulen jinked in for a second and Gareth Steenson converted Exeter gleefully found themselves in uncharted waters.