In 2022, Dustin Martin and Lance Franklin have dominated only in terms of occupying media and public interest. From a pure on-field vantage, Dusty and Buddy – the game’s greatest active icons – are no longer critical to team performance.

It’s quite legitimate to question whether Martin should have been selected by Damien Hardwick for the elimination final against the Lions. He hadn’t played for months and was always going to be compromised in what he could produce.

The circulation of a 2015 video of him appearing to place his hand on a topless woman’s breast at Richmond’s “Mad Monday” for players cannot have helped him on Thursday night, given his existing struggles with motivation and the grief from losing his father early this year. 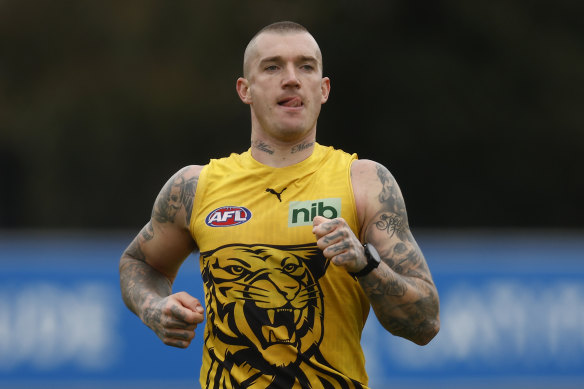 Whatever the fallout from that footage it was an awful look for Dusty and Richmond and the timing of the video’s release/promotion on social media sewers seemed calculated to inflict harm.

Whoever peddled the footage didn’t seem to care about the collateral impact of identifying the woman concerned, either.

But the video of Dusty obscured slightly the stark reality of his position in the game and at Tigerland: He’s a superstar in the dusk of his career, who can’t perform as he did two or three years ago and would represent a major risk to another club, given the $1.2-$1.3 million per season he’s owed next year and in 2024, and the uncertainty about his desire to play. 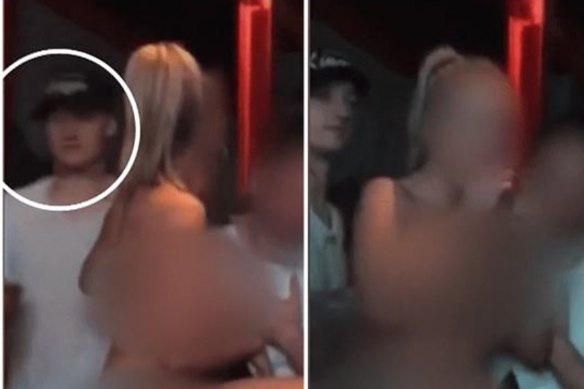 Without Dusty, the Tigers wouldn’t have snared any of those three flags from 2017. He deserves every cent of that contract, irrespective of what he can and can’t do now.

The constant discussion of Martin and Franklin’s futures this year is a measure of their standing and unsurpassed media interest in a reclusive pair. There’s a time lag between their shrunken on-field capability and the level of attention they command. Younger superstars such as Marcus Bontempelli or Clayton Oliver don’t captivate the public/media imagination to the same extent.

Franklin was dominated by Steven May on Friday night, yet the Swans found a way to both bypass May and win the game with relative ease, with minimal contribution from Buddy (albeit who did hurt Christian Petracca’s calf). If he couldn’t play in the preliminary final or grand final, I doubt it would impact enormously on the Swans’ prospects, except that his record – and the residual respect it brings – means he occupies a very good defender, e.g. May.

So, whether Buddy decides to play on next year – or to move to the Brisbane Lions or anyone else – will not greatly impact upon Sydney’s premiership prospects. He’s worth around that $600,000 that the Swans have on offer and if that’s deemed insufficient, the Swans have no need to scramble desperately to keep him. 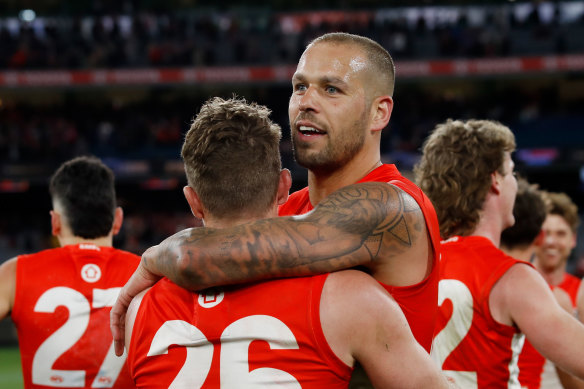 What we are seeing with Dusty and Buddy is nothing more than the life cycle of elite footballers and athletes; Franklin actually has already defied the odds by remaining so capable into his mid-30s and has, remarkably, justified that astonishing and highly risqué $10m deal over nine years.

The reduced influence of decade-plus superstars and icons has been a theme of 2022. Geelong’s Patrick Dangerfield and Joel Selwood remain valuable, but have passed the point where the Cats should be sweating on their availability. Geelong’s success this year has been notable for an even spread and reduced reliance on anyone; they even managed to win sans Tom Stewart, and it’s possible they could cover Tom Hawkins (assuming Jeremy Cameron is there).

Ditto for the Swans, who upset Melbourne with little production from Isaac Heeney.

If you’re looking for symmetry, consider that when Hawthorn won the premiership in Franklin’s last season in their colours (2013), the Hawks had weaned themselves off him – redeploying him as a gigantic flanker in the finals in a multi-threat attack. It was clearly a risk management decision.

Should Sydney win the premiership this year, in what he might be Franklin’s veritable Swansong, history could well repeat in that he would be playing a humble role for the team, as distinct from carrying a forward line.

Richmond’s issues with Martin are more complicated, but Dusty’s contract should render him almost untradeable and one would imagine that Gold Coast, or anyone, wouldn’t consider it unless the Tigers were stumping up a decent share of that $2.5m or so over the two years. The Suns, in any case, need salary cap space for retention.

The union between Dusty and the Tigers should be preserved, in sickness and in health.