The AFL is likely to compel clubs to play with fewer than 23 available players, using top-up players from the state leagues, if teams are again stricken with high numbers of COVID-19 cases during the season.

While the AFL has not yet settled on the minimum number that clubs would need to field a team, AFL sources said it was expected that the clubs would still be asked to play – and avoid postponed games – even if they had fewer than 23 players available. 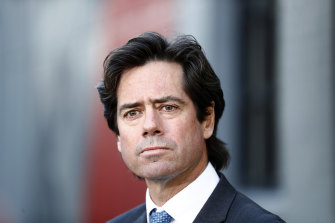 If, for example, a club had 10 injuries and then another 11 players unable to play due to COVID cases – reducing its list from 44 to 23 in a given week – the AFL’s view is that the game would go ahead and, indeed, that the game would likely be played if the club had at least 21 or 22 players.

The AFL’s view that “the show must go on” in the face of COVID infections – unless the numbers available are very low (though the number is not yet set) – is reflected in a message AFL boss Gillon McLachlan has been telling staff, about how NFL team the Denver Broncos used wide receiver Kendall Hinton as their quarterback in one 2020 game when all four quarterbacks on the roster were unavailable due to COVID (Hinton had briefly played the QB position at college).

Sources pointed to the AFLW rules as a guideline for what would happen during the AFL men’s season. In the women’s competition – where several games have been postponed due to large numbers of COVID-19 cases – the clubs are required to field a team if they have 16 players who are fit to play, plus five “train-ons” – essentially extra players from their state league (for example, VFLW) team or reserves list.

The AFL, as reported last week, is willing to use “top-up” players from the VFL, SANFL and WAFL to make up the numbers and ensure that games go ahead, if teams are hard hit by COVID cases (and potentially injury) in a particular week.

While the league is planning contingencies for outbreaks during the upcoming season, several clubs have expressed optimism that top-ups are unlikely to be needed, given that they have 43 or 44 players, counting rookies. This is compared to the women’s competition’s smaller lists of 30 plus train-ons and two fewer players on the field (16).

The AFL is considering that clubs use their VFL, SANFL or WAFL listed players – who are not currently on the senior list – as prospective top-up players in the event of COVID outbreaks. It is also possible that the clubs draw from a centralised pool of state league footballers, which would allow them to select players to fill specific holes, such as a ruckman.

Aside from Western Australia, more than half of the AFL playing group has had the COVID-19 virus – mainly the Omicron variant – during summer.

A small number of players have been infected with the virus twice and, according to club sources, most of those players have suffered more illness the first time than the second. The time between infections, sources said, varied between three months and only a month in one case.

At one point last month, about 20 of the Western Bulldogs’ 30 AFLW listed players had tested positive to the virus and the Dogs missed consecutive games when some of those players, who had trained the following week after a seven-day absence, were not yet feeling robust enough to play.