Port Adelaide chairman David Koch has confirmed that Ken Hinkley’s term as senior coach will hinge on whether the Power makes finals in 2020.

Koch said Hinkley had put on record that he had a trigger clause in his coaching contract that would be enacted if Port played finals this year – activating a contract for 2021. 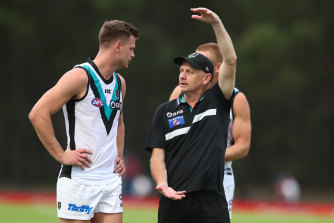 Koch said the contract reflected the club’s position – that the question of whether Hinkley coached Port in 2021 would be decided by whether the club reached finals.

‘‘I never talk contracts. He has publicly, I think it was three-quarters of the way through last year, he said he’s got a trigger on his contract that he’s got to make the finals.

‘‘That’s not from me, that came from him,’’ said Koch, who was speaking after the announcement of a lucrative five-year sponsorship deal with MG Motor that Koch saw as shoring up the club's financial position.

Asked if this meant that to be coaching in 2021, Hinkley would have to get Port into the finals, Koch said: ‘‘Yep, yep.

‘‘That’s nothing new because he said it … in most of our contracts, whether that’s players or coaching staff, I’m a great believer in performance triggers.’’

Koch said Hinkley had set a finals objective for this year ‘‘and I completely support him. He actually said finals and challenge for a grand final, I love him for it. That’s great, don’t be afraid to do it.

The Port chairman said the club was excited ‘‘and quietly confident’’ about their prospects for 2020.

Koch said he believed Port had the talent and maturity to make the finals. ‘‘Too right we do … in my eyes this is the best list we’ve had since I’ve been here.’’

The Sunrise host also said the club’s finances were the strongest they had been at this stage of the year in his time as chairman, having signed the new deal with MG. He did not anticipate major losses if the China game against St Kilda was relocated back to Australia (presumably to Marvel Stadium as a Saints home game), because he said Port did not make money out the China game itself, rather their earnings from the China involvement came from ‘‘non-game’’ revenues.

‘‘We’re not spending any money until we get a definite position on whether we're going ahead.

‘‘We’re in touch with the government regularly because they have an interest in us going as well.

‘‘In the next two or three weeks and the government will make that call too.’’

Koch said if there was travel advice from the government against visiting China and the Chinese government said there were no big events in May, ‘‘then that decision’s made for us’’.

Koch said the club had started a process of looking for a replacement for chief executive Keith Thomas, having identified candidates who ‘‘would be a good fit’’.

Tags: bust, Finals, for, Hinkley, Ko, or
You may also like
Latest Posts