Michael Maguire has secured an unwanted piece of history, becoming the 40th coach to be sacked mid-season in the NRL era as Mal Meninga called for trigger-happy club officials to be held more accountable for their decisions and performances.

The carnage may not be over, with Gold Coast’s Justin Holbrook, Newcastle’s Adam O’Brien and St George Illawarra’s Anthony Griffin also under pressure following indifferent campaigns.

According to data provided by David Middleton of League Information Services, 40 coaches have been sacked mid-year since 1998. A further 26 were turned over at the end of a season, costing the game and clubs tens of millions of dollars in payouts and the hiring of replacements. The costs often blow out even further when a new coach comes into a club and demands his own assistants and staff be installed.

It’s a vicious cycle that frustrates Meninga. The Australian coach has been appointed chairman of the Rugby League Coaches Association, a union that is in the process of being formed to provide a voice and support for the game’s clipboard brigade.

The league Immortal said clubs often took the easy option in firing a coach when there are a multitude of other factors that contribute to poor results. 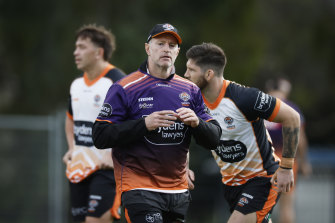 Michael Maguire was sacked as Wests Tigers coach on Tuesday.Credit:Getty

“There is a whole bigger picture around building sustainable success in any organisation,” Meninga said. “Has there been much change in those organisations that have gotten rid of coaches? I don’t think I’m talking out of school when I say my personal opinion is when you give clubs grants of the ilk of $13 million or whatever it may be, there has to be some sort of stipulations and KPIs that revolve around that.

“That comes down to all people in the organisation, doesn’t it? The competency and the skill set of the people running clubs need to be accountable, too.

“The coach is one of a big team, a football department. If your finances and commercial outcomes are driven by the commercial department, obviously the coach becomes the central figure in whatever success you may have.

“I still believe there should be some accountability held around the clubs and their competency when they derive big grants to survive from the game. They probably won’t like me saying that, but that’s the reality.”

The average lifespan of a head coach during the NRL era is 4.2 seasons. However, that figure is bloated by the presence of stalwarts Craig Bellamy, Des Hasler, Trent Robinson and Wayne Bennett.

Maguire has won premierships in both hemispheres, but the Tigers ran out of patience midway through his fourth year at the club.

“In regards to Madge, you can never second-guess his passion and commitment and hunger and competitive nature,” said Tigers chief executive Justin Pascoe. “That’s something we always acknowledge with him, even on Tuesday. In the end, that’s a decision we’ve made and the decision we’re moving forward with.”

“That’s the concerning thing about any decisions based around the head coach, they are probably not as protected as anyone else in the game,” he said. “It needs to be fixed in my mind, you need to have some sort of process in place that enables not only ‘Madge’, as an example, but also his staff to move on in a timely manner and find other jobs.”

Bennett and Robinson have long spoken of a desire to form a strong coaches’ association akin to the one in the AFL.

“There is a strong desire to have a coaches collective to speak on behalf of the coaches,” Meninga said. “That’s where an organisation like the coach’s association can help, with the next generation and welfare of coaches.

“It’s not just the head coach – he gets a big payout – but what happens to his staff? How do we transition those people back into normal life?”

1999: Bob Fulton quit as Many coach
2013: Shane Flanagan was suspended by the NRL
2014: Peter Sharp quit as Sharks’ interim coach