Just like the players they officiate, respect for umpires comes in many shapes and sizes. In early March when Gillon McLachlan apologised to them, AFL umpires were still enduring the journeyman existence that since 2019 has punctuated their working lives.

The field umpires no longer regularly train together, no longer have access to a gym, and until round three of this season were banned from using the Marvel Stadium ground, which last year became their new coaching base. 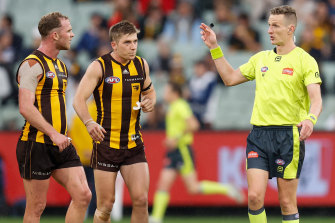 Hawthorn’s Tom Mitchell speaks to umpire Hayden Gavine after a 50-metre penalty was paid to the Cats on Easter Monday.Credit:AFL Photos

Even now, Marvel remains compromised when the umpires assemble each Tuesday afternoon due to the turf lights and cables which make at least half the ground unusable.

The AFL’s football boss Andrew Dillon told the clubs in February that the game was 6000 umpires short at local level and identified on-field abuse as the main reason for the umpiring crisis now threatening the sport.

But having controversially stood firm again this week on player and official dissent, other key indicators would suggest AFL bosses still fail to truly prioritise the game’s officiators or allocate the money that game development managers and umpires, themselves, believe is required to attack the problem.

When McLachlan announced his impending departure 10 days ago, commission chairman Richard Goyder listed his prioritised “to do” list for the outgoing boss. Despite the aforementioned crisis and the AFL’s alarmingly ageing senior umpires’ list, and the forthcoming umpire CBA negotiations – in line with the AFL and AFLW – the umpiring issue was never mentioned.

The game’s failure to prioritise umpiring cannot be helped by the fact that no former AFL player sits on the commission, and Goyder has demonstrated no appetite to change this before McLachlan’s successor is chosen. Since Steve Hocking left last year, no AFL executive boasts playing experience.

In 2017, the umpires’ coach Hayden Kennedy launched the umpires’ campaign to remove the centre bounce from the game, a push that has been supported by every umpires boss over the past decade and most vocally by Wayne Campbell after he returned to a senior AFL club role.

Kennedy spoke about the impact on umpires’ bodies and the fact that it hampered the promotion of otherwise competent umpires. The bounce, along with the running demands of about 15 kilometres per game, is also seen as a deterrent to women entering the umpiring pathway. But, in a devastating decision for the majority of the senior umpires, the commission blocked removing one of the game’s long-standing traditions. Financial constraints also now stand in the way of introducing an extra umpire to reduce the running toll.

A renewed push to limit the centre bounce to open play at the start of each quarter is expected to be inherited by the next AFL chief executive. 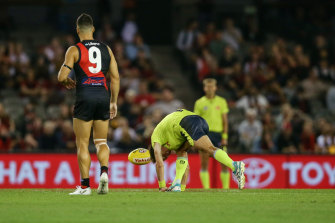 Umpires have campaigned for the centre bounce to be replaced to allow more umpire availability at the highest level.Credit:Paul Rovere

It was Hocking who decreed last year that the umpires move their home base to Marvel Stadium to be situated alongside the game’s review hub, known as the ARC. It is almost three seasons since the AFL umpires were sent packing from their Ikon Park headquarters.

Regularly moved back then from the main oval to Princes Park’s under-curated No.2 ground to make way for Vic Metro or, occasionally, the Blues mens’ teams or, later, Carlton’s AFLW side, some senior umpires would now say that, looking back, the grass was significantly greener.

For a start, they trained together, they had access to a gymnasium and more plentiful rehab facilities. COVID-19 struck soon after the Ikon Park rebuilding, in which the umpires and their memorabilia were removed from their home base, and since then the umpires only come together once a week – for about three hours each Tuesday – for coaching purposes.

Unlike AFL players, the nature of their work forced them to train alone during the pandemic with GPS units and that trend has continued.

Following an ill-fated move during the 2021 pre-season to the Victoria University oval at Footscray, where there was no bathroom on-site, limited parking and the regular presence of community sporting teams led to disjointed sessions, the Marvel Stadium move was announced, but that ground was unavailable over the pre-season due to Big Bash cricket.

It is unclear why Marvel remained off-limits to the umpires while AFL practice games were taking place, or why they were not granted access until round three. So, the umpires were moved to Collingwood’s training ground in the Olympic Park precinct. The goal umpires train at Victoria Park but cost, council and availability issues have deemed the Magpies’ old home ground off-limits to the field and boundary umpires.

It is also unclear whether the next CBA negotiation will address senior field umpire list management. Having been reduced from 40 several years ago to 34 – which created significant issues during the pandemic – the bigger issue is that the game’s best umpires are either pushing, or are over, the age of 40.

Only three umpiring list changes have taken place over the past two seasons, and one since last season, with Essendon District Football League and AFLW umpire Michael Pell promoted this year for the retiring Dean Margetts, making his immediate debut in round one. But a significant number of umpires remain satisfied with the list status quo, and it is unclear as to just where the next pay negotiations will place umpiring development on the list of priorities.

After the competition committee met shortly before Easter and reinforced the crackdown on umpire dissent, it was left to Dillon’s key football lieutenant Brad Scott, who has placed a renewed focus on umpiring, to reinforce the AFL’s stand in the face of some significant criticism from the media and some players.

“Our message to players is that when an umpire pays a free kick,” said Scott, “accept it and move on, and our message to umpires is [that] we encourage you to continue to pay free kicks or 50-metre penalties where players have shown dissent.”

The umpires have also been discouraged from feeling the need to verbally explain their decision-making process in the heat of battle. While the AFL insists that the umpires have found this season significantly less stressful, and the umpires rallied around Andrew Stephens and his decision to stand firm on Harris Andrews and the contentious 50-metre penalty handed to Darcy Moore, several remain uncomfortable with the confronting nature of the significant cultural shift, not to mention uncomfortable in handing out harsh penalties for incidents that always in the past went unchecked.

As McLachlan admitted, the game had allowed umpire abuse to get out of hand and had let it go relatively unpunished for too long. In the short term, though, the harsh correction remains uncomfortable for the game’s officiators.

Off the field, there is strong evidence to suggest that, in practical terms, the development of umpires and their working conditions, for so long a “too hard basket” issue for a long line of AFL bosses, remains, if no longer an afterthought, then still a lower order priority where the game’s wallet is concerned.