Former AFL player Shaun Smith fears he has chronic traumatic encephalopathy (CTE) and says the diagnosis of the late legendary ruckman Graham "Polly" Farmer is only "the tip of the iceberg".

The high-leaping Smith played 109 matches for North Melbourne and Melbourne between 1987 and 1998, in an era when players were regularly expected to carry on after a major head knock and be available for selection the following week. 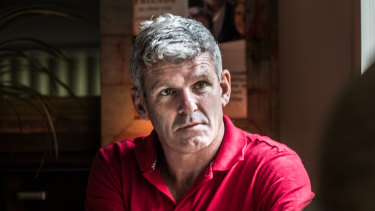 Smith, 50, has detailed his battles in recent years. So depressed was he that twice he attempted to take his own life.

"A few years back, I was that low. I was standing at Richmond station, really had a serious thought about jumping in front of a train coming in. Thank god I didn't," he said.

"The first time I went into hospital, I was at an all-time low. I had had a blue with a so-called friend – I drank 22 cans in three hours. I wasn't quite right. I didn't want to wake up."

He has been unable to work because of his mental issues. "I was that unpredictable day by day … some days I am not very reliable," Smith said. 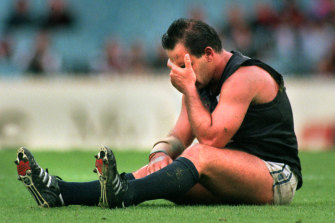 Greg Williams sits stunned on the ground after being hit in a match against Essendon.Credit:Jack Atley

Smith, who has a son, Joel, playing with the Demons, fears for the mental health of the next generation although the AFL has strengthened its return-to-play protocols this season, in which concussed players must pass a test five days before the match.

"When you see young guys like Jack Frost, Koby Stevens, young guys like this having to retire [because of concussion] … Paddy McCartin, I think he should, his brain is showing some wear and tear and Paddy is only 23 or 24. It's absolutely nuts that he is in that situation at such a young age," he said.

"In the days when I was playing … it was toughen up and move on, even if you were feeling crap. It was a badge of honour to go back on and tough it out but, ultimately, that causes the damage and then you play the next week. It's only the tip of the iceberg. There have been a number of brains pledged to the brain bank. Hopefully, those people don't die any time soon."

Former Carlton champion and Brownlow medallist Greg Williams, 56, did not want to elaborate on his own health but says he has had symptoms associated with CTE, including memory loss and aggression.

Williams, who is now a part-time skills coach at Carlton, has openly discussed the impact concussions and heavy knocks had taken on him through his decorated career with Geelong, Sydney and the Blues.

He backed the AFL's upgraded return-to-play guidelines that a concussed player must pass testing five days before the next game, or be ruled out.

"I am not sure what is going to happen going forward but more things need to be done. The AFL is trying. They have changed a fair bit of stuff, the players are pretty much going to get a week off if they get concussed," Williams said.

Williams said he also feared for the long-term mental health of AFLW players unless more free kicks are paid to discourage head-high incidents. He admires the ferocious manner in which the women tackle and bump but said more free kicks were needed and questioned whether some players knew how best to brace themselves.

"I am told girls are six times more likely to get concussed. I am already worried about the girls. When I watch them I admire what they are doing and how it has taken off so much but the way it has been umpired, and how hard they are going, I just don't think they have been umpired well," he said.

"You have to be careful when you come into tackle. Girls especially, they are just charging in, they don't know how to protect themselves. I saw one girl the other night, she looked as if she half broke her shoulder and didn't get a free or nothing in the goal-square, and just got smashed."

Tags: AFL, convinced, Former, he, PLAYER
You may also like
Latest Posts