Greater Western Sydney have poured more misery on Hawthorn with a 22-point victory in wet and wild conditions at Giants Stadium.

The Giants wore down the Hawks in a tough contest to hand the visitors their fifth consecutive loss with a 11.6 (72) to 7.8 (50) triumph on Sunday.

On a day when goals were hard to come by, the Giants’ late inclusion of Callum Brown proved crucial as he booted four majors while playing his first minutes of the season. 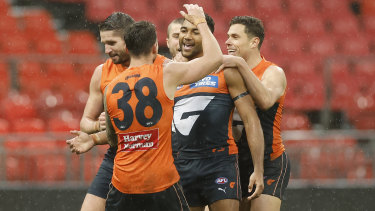 Callum Brown was instrumental for the Giants on Sunday.Credit:Getty Images

Brown was an unused medical substitute last week but was called into the starting 22 on game day in place of big man Lachlan Keeffe. 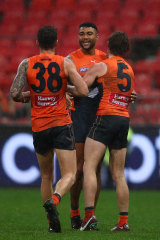 Brown celebrates a goal with his Giants teammates.Credit:AFL Photos

And the 21-year-old was superb as his speed worried the Hawks’ defence and his deadly goalkicking contradicted the slippery conditions.

Predictions of a shootout between two of the more attacking teams in the competition had to be revised as heavy rain fell across Sydney in the 24 hours before the first bounce.

The stormy weather continued throughout much of the match but the Giants and Hawks delivered an entertaining contest with surprisingly sharp skills and kicking for goal.

It was still a day for the purists with plenty of one-on-one football and both teams looking to gain territory at all costs as each regularly kicked the ball off the ground to simply move it forward.

Giants forward Jesse Hogan was one of few players able to regularly clunk the wet ball and he threatened to break the game open in the first half with six marks and 15 disposals but could only convert that into 1.2 on the scoreboard.

Hogan added another major in the second half but continued to have an impact outside the 50-metre arc while Brown did the damage closer to goal.

The Hawks have now lost nine of their past 10 matches and struggled as the Giants’ on-ballers slowly took the game away from them for their fifth win of the season.

The Hawks lost James Worpel in the first term after Whitfield tackled the midfielder as he kicked the ball and both fell hard on his right shoulder with veteran Liam Shiels brought into the match in his place. 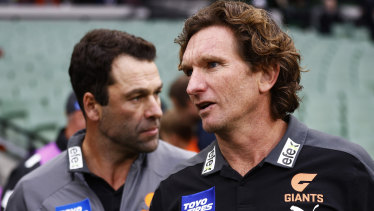 GWS will be on the road next week to face Port Adelaide on Saturday night while Hawthorn are at home to Adelaide on Sunday.

Meanwhile, former Essendon coach James Hird has ruled himself out of the running for the vacant GWS role.

Speaking on Triple M radio, GWS football manager Jason McCartney said: “He [Hird] is actually not interested in the senior position here at the Giants.

“We want to methodically work our way through it and find whoever is the best person for this role.

“It is quite unique, too. We have got to understand it is a different market [in Sydney] we are working in and it is a bit broader than an ability to just come in and coach the footy team.”

Hird, a Brownlow medallist, Norm Smith medallist, and five-time All-Australian, resigned as Essendon coach in 2015 after his role in the supplements saga. He spoke on the Seven football coverage about his current role at the Giants – supporting his great mate, and former teammate, Mark McVeigh.

“It’s good fun being here at the Giants [and] obviously a different experience to the Essendon Football Club,” he said.

“As a senior coach you’ve got a lot going on in your head, so [I’m at GWS] probably to look one or two steps ahead and try and feed him [caretaker coach McVeigh] with that information.

“Some of our old teammates have a bit of a laugh about the three of us [McVeigh, Hird, and Dean Solomon] sitting up there [in the box] but it’s been good fun and Mark has done a tremendous job so far.”

Hird said he wasn’t sure when asked if his current role whetted his appetite to once again be a senior coach.

“I’m here purely for Mark McVeigh and to help the Giants,” he said.

“I think he would be a fantastic coach for the GWS Giants, who are backing him fully and wholly.

“You think about the story of Mark McVeigh, a New South Wales boy, he went to Essendon and has came back.

“He’s been an academy coach and really coached every role at the Giants, whether it be a line coach or senior assistant and now having the interim job.

“I’m here to hopefully get him the job and help them go as far as they can this year.”