Former AFL ruckman Darren Jolly has spoken candidly about how myriad life struggles he's faced in retirement "broke" him and nearly resulted in him taking his own life.

Jolly – a two-time premiership player and veteran of more than 200 AFL matches with Sydney, Melbourne and Collingwood – has survived a brain tumour and lived through legal battles and a marriage break-up since his career ended in 2013.

The 2010 premiership player Jolly was inducted as a Collingwood life member at the club's annual general meeting on Wednesday night. 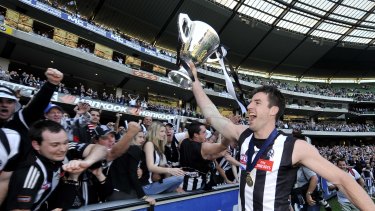 "I can stand here tonight and say everything I was going through broke me," Jolly said.

"After a long, slow burn I had this unrealistic expectation that I could fix everything on my own. 'It will be right, I'll fix it' I was telling myself. I was constantly telling myself and other people that I was fine, and acting like everything was OK – when in fact it wasn't.

"One day I finally acknowledged to myself I couldn't get through this mess on my own, and needed help.

"It was the day I almost did something stupid and ended my life."

Jolly and his now ex-wife Deanne also competed in two seasons of reality TV show The Block, the couple winning the series at their second attempt in 2015.

"I suppose everyone in this room has been wondering what I've been up to in these last seven years," Jolly said.

"(Since) I finished footy back in 2013 … there's been some highlights – like competing in two series of the renovation series The Block, gaining my full builder's licence and purchasing a house in Kew.

"I can honestly stand here and tell you that that's pretty much the extent of the highlights I've had over the past seven years.

"Since 2015 I've been thrown some extremely difficult challenges in my life, that I never thought I would have to deal with – challenges that that tested me in every single way."

Jolly said he was admitted to hospital to remove a brain tumour. Separately he says he spent time in a mental health facility to manage depression.

"Those challenges include being admitted into hospital to remove a brain tumour after I was told from a GP that I probably just had a sinus infection," Jolly said.

"(Then) having everything I've ever made from footy, and after footy, invested into a 2½-year legal battle due to clients I built for not paying. After spending extreme amounts of money fighting for what's right – and winning – I've had to sit and wait a whole year because the clients appealed their loss.

"(And) spending three weeks in a mental facility to deal with depression, leaving my 15-year marriage because I fell out of love and wanted a happier life." 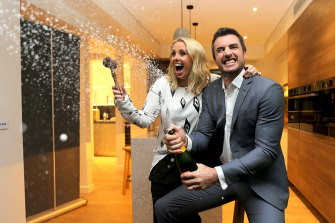 Jolly said he eventually realised he needed professional intervention to deal with his mental health battles after having an "unrealistic expectation" that he could do it alone.

"Everything was too much to handle and I lost control," Jolly said, speaking through tears.

"I thought it was easier just to go.

"I'm not ashamed to stand here tonight and tell you that I spent time in hospital to deal with my issues.

"I look back now and say and can say it the best thing that I could have ever done.

"I learnt a lot about mental illness, including depression, and the coping mechanisms to get back on track, as there are still some challenges I'm continuing to go through.

"I'm in a much better head space now to deal with them.

"I now enjoy talking about my experiences, because (one) it helps me with my recovery, and (two) I hope talking to people about my experiences might help them with their issues and difficulties, and show them that men who have played AFL, or men in general, aren't immune to life struggles."