For Collingwood and Jordan De Goey the stars are aligning on his game and his contract.

Whether it is cause or effect, being out of contract and his future at Collingwood in abeyance, De Goey is playing good, consequential football when it matters. 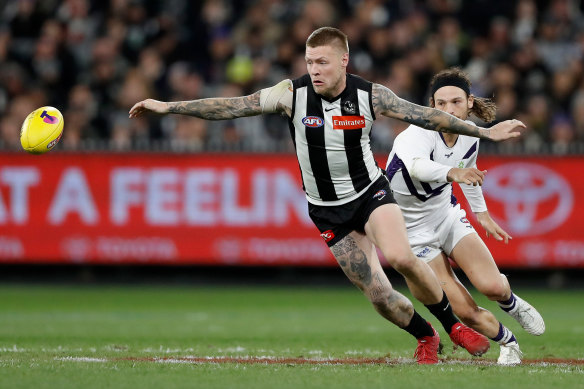 Twice now De Goey has delivered in finals. Against Geelong, he was injured but was still good. Against Fremantle, he played sore and was even better. He was best on ground.

Critically, he has played full-time midfield since he has come back into the team and is not playing from the goal square and feeling like he has to win the game off his boot. He still hits the scoreboard, but he is damaging around the field. 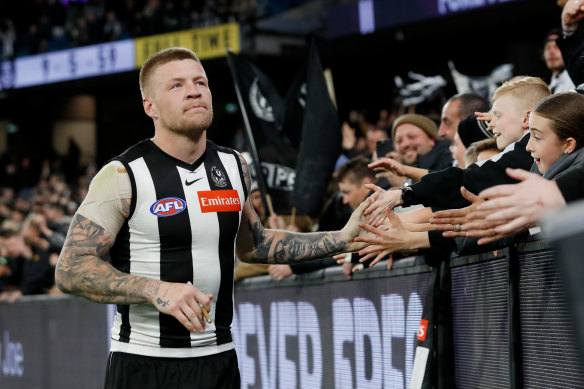 De Goey’s kick to Will Hoskin-Elliott – who remarkably then missed a shot at goal from directly in front – showed rare and delightful touch. Touch is not something De Goey is known for with his kicking. Power? Yes. Touch? No. This kick had touch.

De Goey staying fit and being up around the ball changes the dynamic for Collingwood. When they lost to Sydney, only weeks ago at the SCG, De Goey didn’t play. He makes a difference to Collingwood. Sydney are bigger bodies but the Fremantle players just melted away from De Goey as they tried to tackle him and he powered forward.

Callum Mills often gets the bigger jobs for Sydney, and he could be put head to head with De Goey rather than tagging. Perhaps Luke Parker could do it. Or perhaps they just don’t care. The Swans smashed Collingwood around the ball last time and will expect to do so again.

But then seven key Collingwood players were sick the week before the last game and played like they should have stayed in bed with a Lemsip.

When Taylor Adams went down last week with an injury, the mere description of which makes the eyes water and legs involuntarily cross, Craig McRae was forced to rejig a midfield that had just been beaten by Geelong.

McRae’s response was not to bring in a like-for-like replacement but to draft in Trent Bianco and put him out on a wing. He shifted Josh Daicos to the midfield and rotated Patrick Lipinski, who had played high half forward the week before, through the middle.

It was a risk. But like so much of what McRae has tried this year, things have worked out for him.

Collingwood have played all year by basically locking away Josh Daicos and Steele Sidebottom on the wings and forgetting about them. Their run and creativity has been tremendously important to Collingwood’s successful season and Daicos has had his best year because he has been allowed to be left on the wing, know his role and just play. 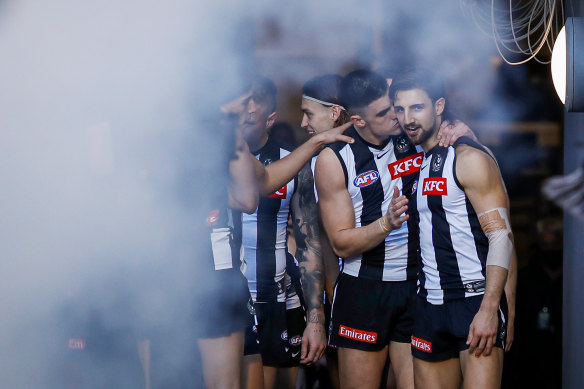 Tinkering with that formula came with the danger they were robbing Peter (or at least Peter Daicos’ son) to pay Paul.

But Josh is a better player now than he was when previously pushed through the middle and was very good on Saturday. He is naturally a creative player who works well in tight spaces.

With De Goey and Daicos playing on ball they will have a slightly different look and feel to when Sydney played them just weeks ago. Fortunately for Collingwood, Sydney are ranked as poorly for centre clearance differential as they are, so if Collingwood can break even in the middle they are a chance of turning the tables on the last meeting.

Geelong spoke this week of the beauty of the position they are in with depth in positions. This is not presently a beautiful dilemma. It is admittedly the only area of concern for the Cats who look otherwise complete across the field. 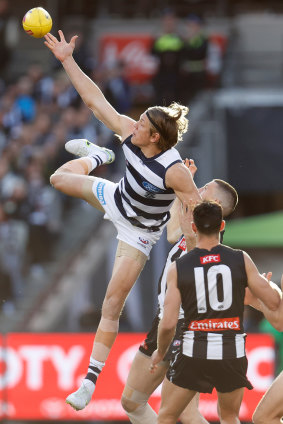 Cats’ selection dilemma. Back in Rhys Stanley or bring in Jon Ceglar?Credit:AFL Photos

They recruited Ceglar from Hawthorn to reinforce and improve this accepted deficiency. He was then left out of the qualifying final side despite playing three games late in the year. But then late in the final against Collingwood, with the game on the line, Mark Blicavs was chosen to ruck instead of Stanley.

Oscar McInerney will come back in for Brisbane after missing the semi-final with concussion. Stanley’s best is good enough to beat anyone, but it is not his best that is the concern.

The Cats also will be mindful that with the three talls in Brisbane’s forward line, Blicavs could be needed behind the ball rather than pinch hitting in the ruck.

For Sydney there is only upside. They beat Melbourne without anything from Isaac Heeney, Chad Warner or Buddy Franklin. They are too good to play two bad games. Franklin ripped Collingwood with a few goals when they beat them only weeks ago.

They play the game on the SCG, where not only do they play the ground especially well, they beat Collingwood there only recently. 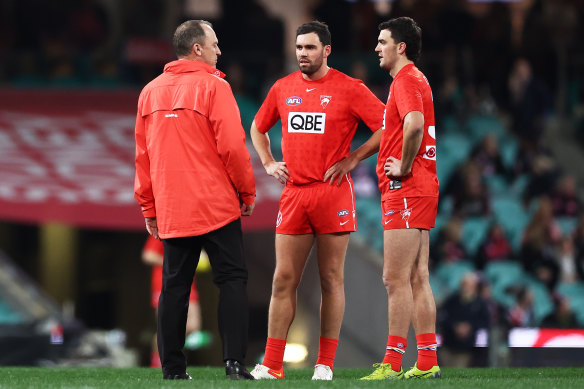 Collingwood’s game struggles on the small ground. They struggle to switch from defence and find space to run, rebound and get pace on the ball, which is so critical to how they construct their attack.

The size of the ground also tightens the defence so the McCartin brothers who are elite in the air can play zone defence, and it is difficult to find space to go around them.

LIONS ON A ROLL

The suddenly over-delivering Lions have corrected their own finals record and their MCG record in successive weeks. They are on a roll and whereas in week one they had the burden of failure weighing heavily on them, now they have the lightness and freedom that they have already done enough to demand respect. 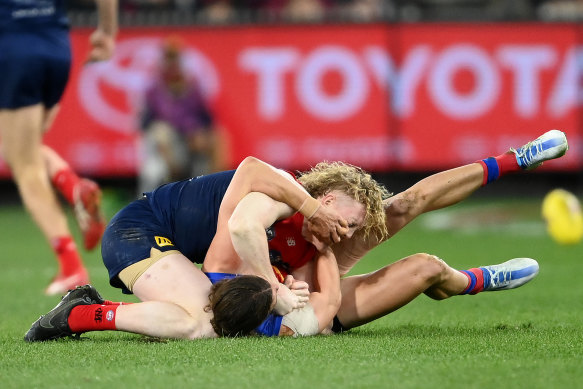 Clayton Oliver of the Demons and Jarrod Berry of the Lions wrestle during the AFL second semi-final. Credit:Getty Images

New dad Joe Daniher comes back into the team and a forward line that worked better without him than the week before, albeit Daniher kicked the wining goal. Of course, he did. Daniher runs hot and cold within quarters let alone matches. Without him Eric Hipwood and Daniel McStay were excellent but Daniher is utterly unpredictable and with the three talls they can stretch Geelong

The Lions will spend the week fighting Jarrod Berry’s one-week suspension because they have no reason not to – there is no tomorrow if they lose the final. A one-week suspension in finals for low-impact incidents always feels heavy as all games are not equal and missing a final is a far greater penalty than missing a home-and-away match. In this instance if Berry is found guilty of deliberately trying to eye gouge – he will strongly argue it was accidental – a week is not unreasonable.