Jesse Hogan is officially on the trade table, with Fremantle telling rival clubs that they are open to offloading the contracted key forward next month.

And the Dockers are also prepared to part with midfielder Connor Blakely despite the midfielder having two years to run on his existing deal. 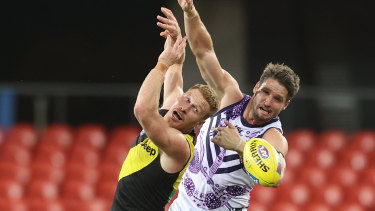 Jesse Hogan in action against the Tigers earlier this year.Credit:Getty Images

Hogan, 25, has one year left to run on the three-year contract he signed with Fremantle after being traded from Melbourne at the end of 2018 however his future at Cockburn has appeared increasingly clouded following a quarantine breach that cost him $8000 at court last week.

The Dockers took a dim view of that indiscretion, which was the continuation of a turbulent run on and off-field since the one-time prodigy returned home to Western Australia as part of a series of deals that sent Lachie Neale to the Brisbane Lions, where he has just won a Brownlow Medal.

Rival clubs confirmed on Tuesday that the Dockers had informed them that both Hogan and Blakely are gettable. Sources close to the situation indicated that the decisions to put the pair up for trade had been two-way streets, with the players also feeling as though their football futures may be bettered elsewhere.

Whether there is a suitor for Hogan remains to be seen. He suffered a serious foot injury in mid-2019 and was limited to just seven matches this year, spending some time in defence. He also took time off earlier this year for mental health reasons. Even if he remains at Fremantle he faces an uphill battle to trigger a two-year contract extension at a significantly increased wage under a clause in his current contract.

Victorian Blakely, 24, played just five matches for Fremantle this year as younger midfielders Adam Cerra and Caleb Serong were preferred. Essendon have indicated their interest in bolstering their midfield however it is unclear whether Blakely is one of their targets.

Hogan is one of a long list of key forwards who could be on the move this trade period, with Joe Daniher and Jeremy Cameron both set to depart their respective clubs as free agents and Tom McDonald and Ben Brown also up for grabs.

Asked about Hogan's future at the club on ABC radio on the weekend, Fremantle chairman Dale Alcock was non-committal.

"Jesse's currently on leave and we're going to take some time to work carefully through that and work and liaise with Jesse, his management and the club," Alcock said.

"That's our position on that.

"We're not going to react to it [his contract] immediately. He's done his hotel quarantine, he's out of that, he's on leave.

"The football department have picked that up and our senior people will pick that up with him and his management in due course."

Tags: and, Blakel, Fremantle, Hogan, put
You may also like
Latest Posts