Melbourne's roguish ruckman Max Gawn will captain the club in 2020 with Jack Viney as his deputy, as the Demons try a new leadership structure in an attempt to put a terrible 2019 behind them.

"It's a dream come true," Gawn said, as he was unveiled as Melbourne captain on Monday. 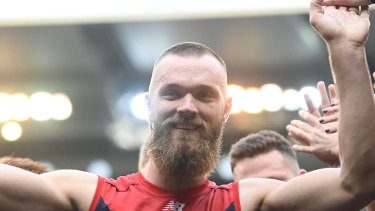 From the front: Max Gawn will lead the Demons in 2020 Credit:AAP

While Viney did not attract enough votes to keep his job as co-captain, he and Gawn were the two standout leaders in a player-led ballot. The Demons will not have a leadership group in 2020, breaking the trend among AFL clubs for spreading the leadership load.

Viney was elevated to the captaincy three years ago alongside Nathan Jones and many had expected the robust midfielder to be the sole skipper this season after Jones stepped down after a difficult 2019.

However, Gawn – the unconventional footballer who has claimed consecutive best-and-fairest awards, sharing last year's honour with Clayton Oliver – was voted into the captaincy by his teammates.

Gawn, 28 and with 120 matches to his credit, is in the prime of his career and was a key reason why the Demons made a preliminary final in 2018.

"He is going to make a fine leader of our footy club," said coach Simon Goodwin.

Gawn has endured an interrupted pre-season because of a knee injury – he had a grade-two medial tear at the Demons’ pre-season camp in Queensland – but the club maintains he is on track to play in round one against the West Coast Eagles in Perth.

Viney was born for leadership and his fearless attack on the man and ball has made him one of the toughest midfielders in the league.

The captaincy completes a remarkable rise for Gawn, who was taken by the Demons with their fifth selection and 34th overall in the 2009 national draft. He endured a rugged start but since 2015 has been the Demons' frontline big man.

He had ACL surgery in 2009 and missed most of 2010 season. He made his senior debut in 2011, having his No.37 jumper presented to him by club great Jim Stynes. He missed the entire 2012 season because of a major knee injury and returned in 2013.

Tags: From, Gawn, larrikin, leader, to
You may also like
Latest Posts