Demons reel before Cats on the rebound

By the time Geelong hit the MCG yesterday, nothing more needed to be said. The ridicule, the embarrassment and the teetering reputations said it all. There could be only one response. 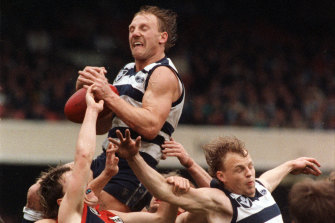 Damian Rourke, pumped up and ramming his body into Steven Hocking even before the Cats broke the banner, returned from the toss of the coin and told his men it was time for action.

“There’s no need for words,” the Geelong captain said before launching himself into Steven O’Dwyer at the first bounce. Bourke and O’Dwyer clashed like a pair of cymbals, the impact reverberating around the stadium. All of a sudden, it was on. Brawling bodies everywhere.

It was all highly predictable stuff but, somehow, from Geelong’s point of view, essential to purge the players’ guilt. “We were all sickened by our performance last week,” Neville Brims said after the match. “We had a burning feeling in our guts all week.”

And so, a week late, Geelong entered the world of finals football. It has been a harsh world so far in 1989, one of the more physical openings to a finals series for years, and a week of disgrace at Kardinia Park was long enough for the cats to find the necessary ruthlessness.

Unlike Saturday, when Dermott Brereton intervened to change the course of the game by physically putting opponents out of the contest, the effect of yesterday’s aggression was more psychological. The Cats simply had to get it out of their system, almost as if it were an initiation, before they could settle down to the job of playing football. 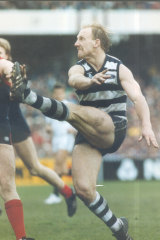 Gary Ablett at his explosive best at the MCG.Credit:The Age Archives

Of course, it was the football, not the rough stuff, that flattened Melbourne. The Demons stood up to the physical onslaught, but they had no answer to the athletic one.

In the end, with its confidence rising every quarter, Geelong finished Melbourne off as though it was just another piece of home-and-away fodder, winning by 63 points. As ever, Melbourne was gritty but, as has been suspected all season, lacked sufficient class when a came to the crunch.

To win these matches, the Demons need every man performing a task, and they simply could not contain players of the calibre of Barry Stonehem, Andrew Bews, Gary Ablett and the day’s surprise packet in Shane Hamilton.

Rodney Grinter started promisingly on Ablett until, during time-on in the first quarter, Ablett rose above the pack to take a spectacular mark, bringing the ball down to earth behind his left hamstring. Grinter let slip an ironic smile, which turned out to be an appropriate response because, by the day’s end, Ablett had kicked 7.7 on a string of opponents, namely Grinter, Steven Febey, Sean Wight and Peter Rohde.

If Ablett was spectacular, Stoneham was the outstanding forward. Jamie Duursma has done some sterling jobs for John Northey at centre half-back, but yesterday’s was not one of them. The Geelong centre half-forward was simply too mobile, and marked nearly everything that came his way, providing Ablett and goalsneak David Cameron with a poultice of scoring opportunities. Another beneficiary of Stoneham’s dominance was Shane Hamilton who, in his fourth game this season, roamed around the wing and half-forward flank to great effect. One can only wonder how much greater the margin would have been if Bruce Lindner had not fluffed most of his chances.

A player from a neutral VFL club said during the week that Malcolm Blight’s primary tactic was to have Mark Bairstow and Paul Couch winning the football. Yet, incredibly, Blight started with both his prime movers on the interchange bench after Essedon tagged there out of business the previous week.

Still, that did not seem to matter at the centre bounces, where Bews cut Melbourne apart with 24 crucial possessions. Even though the ruck pairings of Flanigan-Stynes and Bourke-O’Dwyer evened out over the day, Geelong thrashed Melbourne in clearing the ball out the middle, thanks mainly to Bews, who on many occasions had a path cleared for him by the effective body work of one of the Hocking brothers.

Melbourne captain Greg Healy spent a miserable day watching Bews disappear into the distance. (An added bonus for Blight was that Bairstow played exceptionally on a wing after coming on in the second quarter).

A measure of how rattled Melbourne became was some of the positional changes Northey tried to reverse the trend. At various stages towards the end of the match, he had Bennett at centre half-back, Johnson on a forward flank, Spalding in the ruck and so on and so on.

What he really needed was an Ablett or a Stoneham or a Bews. But Geelong has them and, it now seems, the necessary aggression to make an impact in the battle for the 1989 flag.