First published in The Age on September 1, 2019

LED by the wizardry of Jeff Farmer and his nine goals, Melbourne exorcised the second-half demons that have plagued the club for the past two weeks to thrash Collingwood at the MCG yesterday. 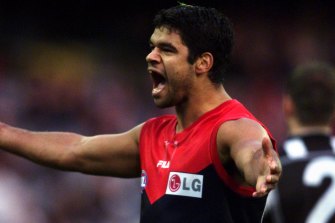 Melbourne had lost the second half of its past two matches, against the Western Bulldogs and Carlton, by an aggregate 143 points. It cast those devils out comprehensively yesterday, converting a three-point half-time edge into a 65-point winning margin.

No need to ask where those evil spirits went. Collingwood‘s miserable losing run now extends to nine games, and the only reason it may not get to double figures is because the Magpies are scheduled to meet St Kilda at the MCG next Friday night. 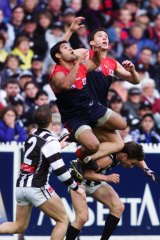 Farmer produced an amazing performance in less than two full quarters of football. He had a net one possession in the first half (one kick, one handball but also one free against) and started the second on the bench, only returning when Ben Beams went off with a wrist injury.

He kicked his first goal 10 minutes into the third quarter. It was Melbourne‘s 10th and it gave the Demons a 16-point break, to that stage the greatest advantage of the game. So he cannot fairly be said to have been the match-winner.

The man they call “the Wizard” was the game-breaker, however. He added eight more goals for an AFL career-best tally, and they were spiced with bits of magic. There was an aerial “steal” from Tarkyn Lockyer, plucking the ball from the Collingwood defender’s arms while running with the flight. There was a Farmer “speccie”, timing his leap to the ball better than teammate Russell Robertson’s even-more spectacular surge.

There were baulks, blistering turns of speed, regulation majors – and most goals of the whole pot-pourri greeted by the raising of the index finger of both hands and an insouciant smirk.

Collingwood, minus skipper Nathan Buckley, had started in a very competitive mood. The Magpies won the opening 15minutes, then came back hard late in the second term as the Demons skipped to a nine-point lead. The key Collingwood goal came when Paul Williams smothered a Guy Rigoni handball, picked up the rebound and kicked truly. 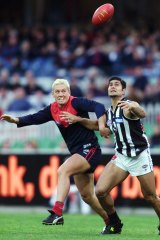 The Demons owed their slim lead to midfielders Rigoni and Andrew Leoncelli, a livewire start from Robertson and a winning ruck in Jeff White. Robertson, in particular, was devastating in the first term. Starting on acting Collingwood skipper Scott Burns, who is often used as a playmaker, Robertson ran him ragged. His first-quarter contribution was seven kicks, eight marks, two handballs and two goals.

Similarly, at the start of the second half, it was Lockyer who suffered the galling fate of epitomising Collingwood‘s defensive woes. He gifted Melbourne its first goal of the second half when he played on from a kick-in but his chipped kick landed with Beams, who gleefully walloped it back over Lockyer’s head.

Beams broke his wrist in the next passage of play, his unfortunate exit bringing Farmer back on to the field. Schwarz goaled to put Melbourne 16 points up. Then Farmer reaped the harvest of all that hard work.

Just as Burns had been on the end of every breakdown in Collingwood‘s defence in the first quarter, now it was Lockyer’s turn. It was hardly any consolation to point out that Farmer was simply unstoppable. 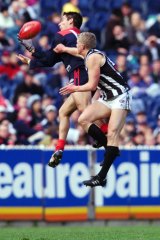 Despite Farmer’s belated pyrotechnics, Adem Yze was Melbourne‘s best, his quirky skills evident as he acquired 30 kicks and five handballs and drove his side into attack time and again from the wing.

Yze’s best moment among many good ones was another sliding left-foot goal off the ground, slipping the ball past a pack of defenders to almost duplicate the one that got the Demons back into the round-10 game against Brisbane, their most recent win before yesterday.

For Collingwood, it cannot get much worse. Melbourne coach Neale Daniher pointed out the Magpies’ relative inexperience. Six members of yesterday’s side have played fewer than 20 games, with another five between that number and Chris Tarrant’s tally of 36.

Tarrant was one of their better players, kicking four goals and taking several strong marks at centre half-forward. Simon Prestigiacomo did a reasonable job on David Neitz, probably just shading the Demon skipper. Rupert Betheras was a hard-working defender and midfielder, as was Paul Licuria.

After that, however, the Magpies did not have too many clear winners. And without clear winners, it is very hard to win a football match.

Tags: 2000, Archives, Demon, From, THE
You may also like
Latest Posts