It will be 20 years next month since Geelong used pick 40 in the 2001 national draft to add Gary Ablett jnr to their list as a father-son after using the three picks before him on Jimmy Bartel, James Kelly and Steve Johnson.

The father-son rule that year allowed clubs to make one father-son selection in the third round, giving Geelong the chance to make three era-defining picks before selecting Ablett, who, in truth, would have probably only attracted a second-round bid under today’s rules before becoming one of the game’s greats.

That reality has tempered – to some extent – the excitement Collingwood supporters feel about landing Nick Daicos, the son of club legend Peter and brother of fan favourite Josh, in this year’s national draft. 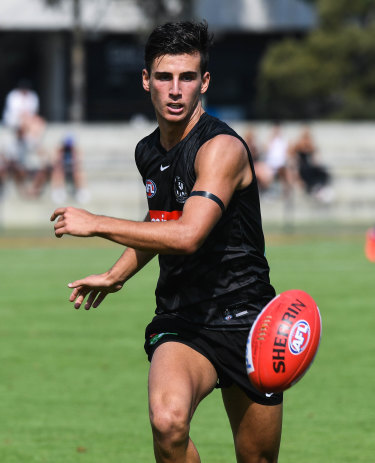 Everyone knows that either North Melbourne, Greater Western Sydney or Gold Coast will make a bid on the precocious Oakleigh Chargers’ midfielder at pick one, two or three, meaning the Magpies will need to pay close to full tote odds for the 18-year-old born on January 3.

The good news for Collingwood fans is that Magpies football manager Graham Wright has guaranteed, on AFL Trade Radio, that the club would match the bid for Daicos wherever it comes, having committed to doing so when they announced his desire to follow in his dad’s black-and-white footsteps in August.

“We have got to prepare ourselves for the worst there and try to get points in and how we do that is going to be interesting in the next few weeks and leading into the draft,” Wright said.

It is a conundrum they face with the Western Bulldogs who, for the second year running, will need to match an early bid when opposition clubs select Sam Darcy, son of former Bulldogs ruckman and media personality, Luke, in the first five selections.

To claim Daicos, Collingwood have to use draft picks to match the number of points minus a discount allocated to the selection where the bid arrives that is found on what is called the AFL draft value index.

This is where life becomes complicated for all but the most devoted football tragic with a double degree in nuclear physics and mathematics.

If North Melbourne bid on him with the pick one they have earmarked for South Adelaide’s Jason Horne-Francis, then Collingwood will need to stump up 2400 points to match the bid.

That figure is arrived at because under the index, pick one is allocated 3000 points but, after the 20 per cent discount is given for father-son selections, that figure becomes 2400. At pick two, they need to find 2014 points, at pick three, 1787 points and at pick four, 1627 points and so on.

Having drafted out their first-round selection in last year’s draft to the Giants (now pick two), they have been left with picks 36, 39, 41 and 45 which totals 1707 points right now, but will become less as compensation to Richmond, Adelaide and Carlton for Mabior Chol, Jake Kelly and George Hewett sits in the middle of those picks.

With the Bulldogs’ Patrick Lipinski and Geelong’s Nathan Kreuger coming through the door, too, they will expend further draft capital – albeit they hope to only use late third-round picks or future picks on those players – before any bid comes for Daicos.

That means some juggling to ensure they don’t have to dip into next year’s draft to find the points for Daicos.

Collingwood plan to trade in other clubs’ selections that currently sit in the third and fourth round of the 2021 national draft if points are required, with the Magpies able to either hand over future second- or third-round picks, or trade one of their third-round picks for a package of later picks other clubs hold later in the national draft that carry more points when combined.

With list spots tight, such picks will be available, but to make those trades the Magpies need a vacant list spot for each pick they gain in the 2021 national draft, one of the reasons half-a-dozen uncontracted players remain in purgatory during the trade period.

The Bulldogs, who have pick 17, having held on to this year’s first pick after accumulating enough points to land Jamarra Ugle-Hagan (a next generation academy graduate) in 2020, are reportedly eyeing off Richmond’s picks in the 20s in exchange for pick 17 in what would be a win-win trade to land Darcy.

The Bulldogs’ timing has been impeccable as they would not have been able to match a bid for Ugle-Hagan under this year’s new rules relating to academies, where clubs can’t claim priority access to a graduate if they are selected between picks one and 20 this season, which will extend to picks 1-40 in 2022. This change will deny Melbourne their graduate Mac Andrew this season.

But Daicos is the player all eyes will be on, as the Magpies attempt to systematically work their way through the conundrum between the opening of trade period on Monday and the national draft on November 24 to land a special talent with a name that is music to Collingwood fans’ ears.

Tags: c, calculators:, get, How, out, THE
You may also like
Latest Posts